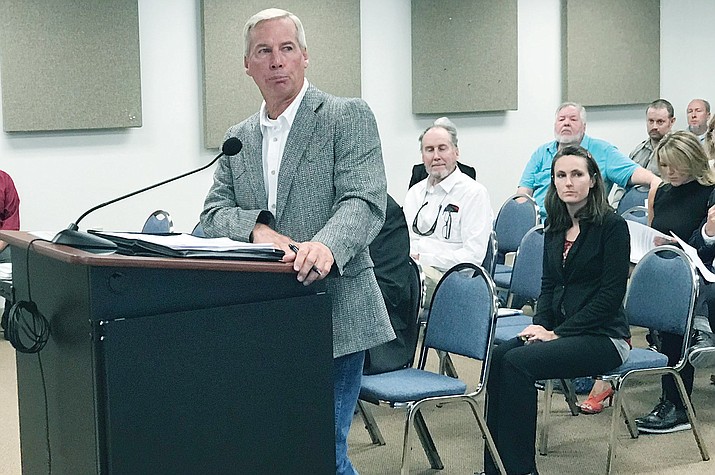 COTTONWOOD — By unanimous vote Wednesday, the Yavapai County Board of Supervisors gave the green light to one of the largest single commercial projects to be approved for the Rimrock area in recent years.

The vote came after hearing a long series of objections voiced by local residents.

The board heard from the developer, Dugan McDonald of High View LLC, as well as local residents who either opposed or had specific concerns about the project — a shopping center, set to be built on a 8.17-acre parcel on the southeast corner of East Beaver Creek Road and North Dave Wingfield Road.

The grocery store was the main element of the center desired by both Ron Melcher, president of the Beaver Creek Community Association, and others at the meeting. “The center fits into our central business district plan,” Melcher said.

Melcher said the only large concern his group had was regarding the C-2 status, and, should the property be sold or McDonald’s plans change direction, the types of businesses that could occupy a C-2-zoned shopping center.

This was mitigated by stipulating no vehicle sales, except for small ATVs or similar registered or non-registered vehicles, would be allowed.

Also, no mechanic or repair shops will be permitted in the re-zoned plan.

Concerns from the public included where a wall around the center would be placed, soil erosion, storm flow runoff impact from more paving, the number and location of shopping center entrances, the location along what was called a “blind curve” at the T-intersection at Wingfield Road, the fact there are already three gas stations in the area and the fumes from diesel vehicles.

There were six letters sent to the board about the project — three in favor of it and three opposed.

After the meeting, McDonald said many of the placement and design issues would be worked out through engineering planning and a traffic study that are set to take place.

McDonald said he thinks the location along Beaver Creek Road will be manageable.

“The curve is not that sharp, and I don’t think it’s that big of a deal,” McDonald said. “We’ll see what the traffic study shows.”