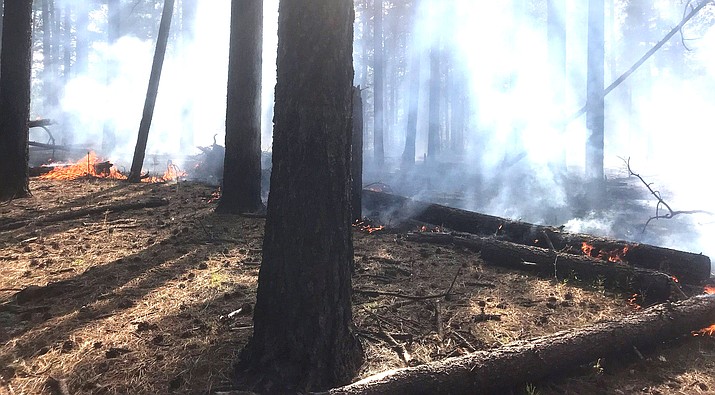 FLAGSTAFF – The 4,190-acre Whiskey Fire is now 20% contained. But the fire, burning about eight miles east of Turkey Butte Lookout is not expected to be fully contained until Oct. 16, according to an incident overview at InciWeb, an incident information system.

Wednesday, fire managers on the Whiskey Fire used a helicopter to perform aerial ignitions to supplement the efforts of firefighters conducting hand ignition burnouts, according to a news release from the Coconino National Forest. Those efforts produced large volumes of smoke going northeast and a significant amount of smoke for the next several days.

Utilizing a helicopter to conduct aerial burnout operations in remote and steep sections of the fire area reduces risk to firefighters working on the ground, the news release stated. “Ignitions are important to secure control lines and keep the fire within the predetermined containment area.”

Anyone who plans to travel near the fire area should expect delays and alternate routes as identified, the release stated.

Fire patrols are present to guide forest visitors to alternative routes in the event of a temporary road closure. Smoke will be present, so turn your headlights on for safety.

Firefighters will attempt to reduce impacts to the public as much as possible, the release stated. “However, there are no perfect weather conditions or tactics that exist to remove smoke impacts entirely from a fire.”

Quick updates will also be provided on the Coconino National Forest’s website at coconinonationalforest.us

The lightning-caused Whiskey fire was reported by the Turkey Butte fire tower lookout on Sept. 2.