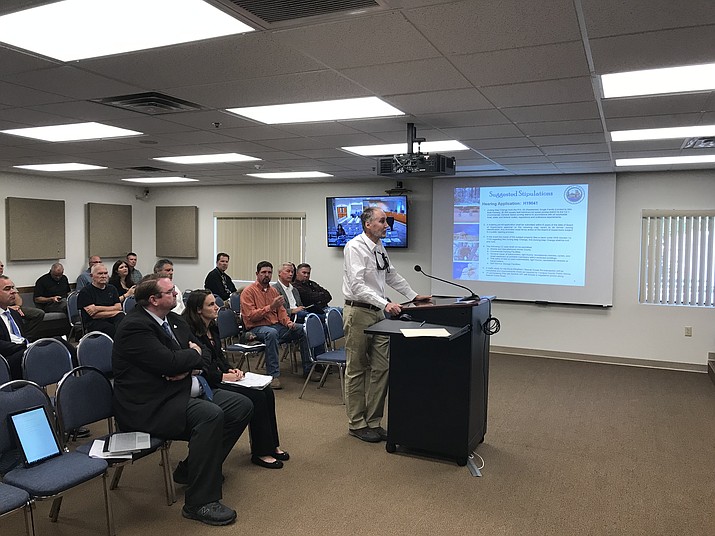 Ivo Buddeke speaks at the Yavapai County Board of Supervisors meeting of Wednesday. Despite the protests of Buddeke and others, the board voted 3-2 to repeal the county’s 2003 water well code.

COTTONWOOD —By a 3-2 vote Wednesday, the Yavapai County Board of Supervisors narrowly approved a repeal of the county’s water well code.

With Supervisors Rowle Simmons, Tom Thurman and Chair Randy Garrison voted in favor of the repeal, while Supervisors Mary Mallory and Craig Brown voted against it.

“The redundancy of inspections is rampant,” Thurman said shortly before the vote, which came after a public hearing on the code at Wednesday’s regular meeting. “Gov. (Doug) Ducey’s directive is to remove as much duplicate regulation as we can. There can’t be a failsafe for everything.”

The vote was a change from the May 15 meeting, when the board had voted unanimously for the repeal of the 2003 code. Jack Smith was still on the board, having been replaced by Mallory this summer when he accepted a presidential appointment with the USDA.

The repeal was not advertised properly in advance, and a new cycle of advance notice and a public hearing were built, with the hearing taking place at Wednesday’s meeting. Several people spoke for and against the repeal — with some organizations sending representatives.

The purpose of the repeal is for the county to yield to state code, even though the 2003 county code has a more-stringent requirement prohibiting wells from being drilled within 50 feet of a property line.

Letters of opposition were submitted to the board. Those who opposed the repeal in person at Wednesday’s meeting included local resident Ivo Buddeke, who said the ordinance is frequently relevant, despite state code addressing similar permitting, and a National Park Service representative who read aloud a letter from Dorothy FireCloud, superintendent of Montezuma Castle, Montezuma Well and Tuzigoot national monuments, opposing the repeal with mention of diminishing of groundwater supply.

As of Wednesday, there were 11 applications awaiting the outcome of the code repeal, according to Development Services Director David Williams.

Supervisor Brown said he felt the county could hang on to the ordinance and possibly have Yavapai County lead the way for the state or stand apart for a time, like it had done with its mobile-phone driving restriction.

“If it were a good part of code, other counties would have followed our lead by now,” Thurman countered. “Realtors need to do their due diligence.”