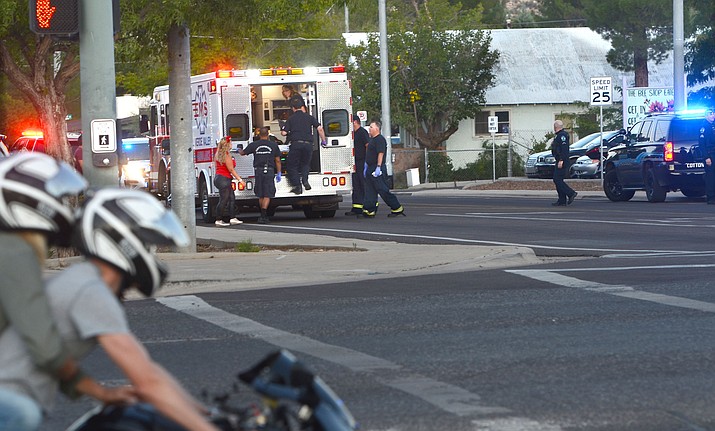 Emergency responders place an assault victim in an ambulance Saturday near the entrance of Main Street and Mingus Avenue. There were no arrests as "The other driver left prior to law enforcement's arrival and we do not have any information on who that was,” said Cottonwood PD Sgt. Monica Kuhlt. VVN/Vyto Starinskas

COTTONWOOD — Police were called to the intersection of Main Street and Mingus Avenue early Saturday evening for an assault, but ended up not making any arrests.

According to Sgt. Monica Kuhlt of the Cottonwood Police Department, officers responded to a call about an assault that took place near Main Street and Mingus Avenue, at about 6 p.m.

Officers discovered a minor vehicle wreck had occurred on private property, which led to an altercation.

The man who was assaulted got out of his vehicle and an altercation occurred between him and another person.

“The other driver left prior to law enforcement's arrival and we do not have any information on who that was,” Kuhlt said. “The victim was uncooperative with law enforcement and officers could not locate any cooperating witnesses.”

Kuhlt said the injured man was transported to medical facilities by ambulance, but was released the same night.

Cottonwood Police are not seeking charges on anyone related to that incident at this time.

Witnesses who have information about the incident can call the Cottonwood Police Department at 928-634-4246 or Yavapai County Silent Witness at 928-771-3260.

Kuhlt said between midnight on Friday and 5 a.m. Sunday, police handled 98 calls. She said this is higher than what police would typically see during a weekend, but not alarmingly high considering the enhanced patrol presence Cottonwood PD had on the streets during the TVR weekend.

Two men were cited and released at the motorcycle rally for disorderly conduct, a misdemeanor, and one person was arrested in an “extreme DUI” case, Kuhlt said. All three are local residents.