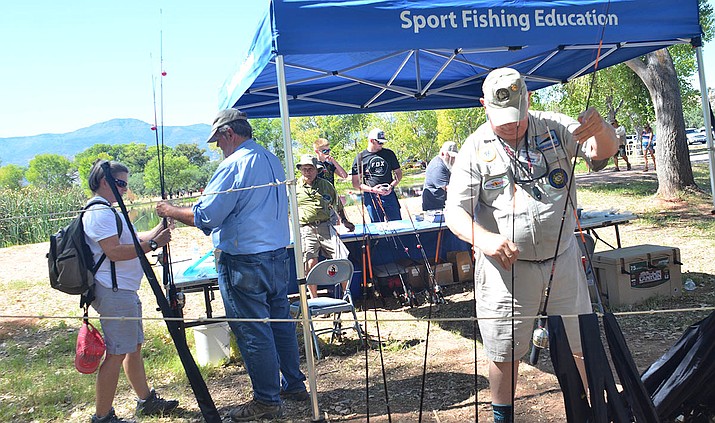 Saturday’s Verde River Day begins with free fishing at the Dead Horse Ranch State Park lagoon at 8 a.m. All other activities begin at 9 and the event is free. VVN/Vyto Starinskas

Last week, it was motorcycles and rock ‘n’ roll.

This week, the Verde Valley’s second major fall community festival shifts its focus to the quiet solitude of the Verde River.

The recurring focus of the annual event is the importance of maintaining the Verde River as one of the last perennial, free-flowing high desert rivers in the Southwest.

That is something we never should take for granted. In fact, when Verde River Day was first conceived in the late 1980s, the river was under such threats that it annually made the list of the most threatened rivers in the United States.

The river had been exploited and taken for granted to the point that it was best known as the “Dirty Verde.” One of the river’s worst enemies was an unregulated sand-and-gravel industry that mined material directly from the river bed. Over time, there became a growing awareness that materials mining was changing the natural course of the river. It made the river more susceptible to bank destruction during flood cycles. It rendered the river as nothing more than a silt-infested drainage ditch.

Dumping old car bodies into the river was viewed as viable erosion control for so-called bank stabilization. Likewise, old car bodies were piled up across the river to create unregulated dams. Cattle roamed at will in the river channel, destroying young riparian seedlings before they could ever get a chance to grow. The river’s banks were strewn with old couches and mattresses.

The keynote speaker for this year’s Verde River Day, John Parsons, was responsible for spreading the message in the 1980s that our stewardship of the Verde River was sadly lacking. More than anyone else at the time, he was the one who taught us that the Verde River was a resource to be protected vs. used.

In what Parsons calls a “superb stroke of historical irony,” an Environmental Protection Agency cease and desist order that forever banned sand and gravel operations on the Verde River was dated Sept. 30, 1989.

That just happened to also be the same day as the very first Verde River Day.

As Parsons told The Verde Independent earlier this year, “Verde River Day has thrived for 30 years primarily because people have a need to know more about the river and some folks specifically want to show that they care about the river. The event was not a passing fad. Enthusiasm for Verde River Day did not wane. In fact, a credible case could be made that interest solidified and increased through three decades.

The collaboration, continuity and collective community efforts necessary to carry Verde River Day forward have been sustained, encouraged and rewarded because of the recurrent annual public support for the event and the underlying purpose.

The 30-year legacy of Verde River Day is a rock-solid testimony that the people who live in and visit the Verde Valley care about the river and are willing to underscore and demonstrate that care with their attendance at and support for Verde River Day.”