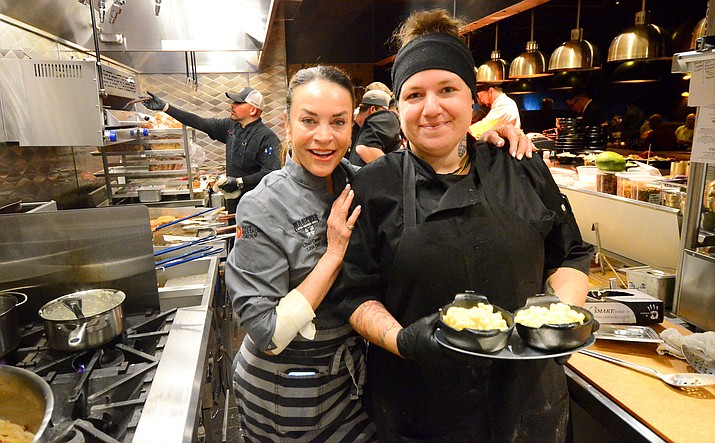 Lisa Dahl has done it again.

Despite a rainstorm, customers lined up for the “soft opening” of her fifth restaurant in Sedona – Butterfly Burger in the Village of Oak Creek – Monday.

It's also been 20 years since Dahl opened her first restaurant in Sedona.

Dahl is also planning on a second Pisa Lisa location soon, according to her website, while the The Dahl restaurants have more than 350,000 guests per year.

Monday, as customers sat in her latest restaurant, Dahl was working in the kitchen at the height of its opening rush.

Before the opening, Dahl and her new staff seemed like they did not know what to expect, but by noon the restaurant was packed and people were waiting to get in and try Dahl’s newest creation.

Her website is where Dahl describes her new restaurant as a “Sedona, A Couture Burger Lounge. “

“Butterfly Burger is reveling in low-lite glamour and an unabashed cocktail lounge look and feel. Black walls covered in rough-hewn planks of mushroom wood set the tone. The dark sultry lighting builds the mood and complements the amber glow from the bar’s rose-gold mirrors," the website states.

Unlike her most-famous restaurant, the Mariposa, which is visually an extraordinary outdoor experience, the Butterfly Burger is a pleasant indoor experience. The restaurant is located at the site of the former Outlet Mall in the VOC.

Inside diners walk by a Cathedral-like illuminated bar, which stands out in the dimness of the restaurant, as patrons focus on conversation, beef and beer.

The burgers have names like The Waco Kid, Oui Oui Monsieur and Mi Quiero Vaquero flavors “from the American southwest to France, Spain even Greece with the Gyro Burger made from a proprietary spice blend of all-natural Colorado lamb,” states the menu.

And for those who don’t eat hamburgers, Dahl suggest her Primo Portobello with caramelized onions and chipotle aioli on grilled ciabatta.

Each burger bun is stamped with a signature butterfly, a theme that is carried throughout the restaurant’s design and architecture.

One opening day, one of several chefs quickly cooked a dozen fat burgers as waitresses kept bringing their orders.

Dahl worked with the kitchen crew, showing them how to prepare mac and cheese and other sides. Later, as she is known to do at her other restaurants, Dalh went out to the restaurant floor to greet her diners.