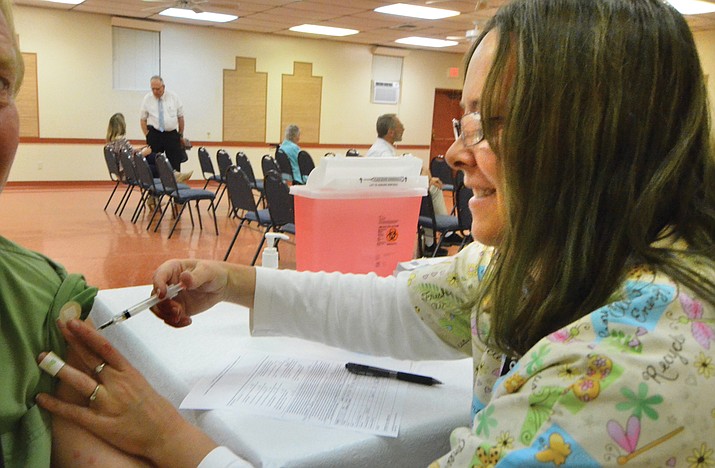 As flu activity remains high, remember it’s not too late to get vaccinated if you haven’t been this flu season. Check with your doctor or Yavapai County Community Health Services at 771-3122 for an appointment. VVN/Vyto Starinskas

If you have insurance, please bring your insurance card. If is not convenient to make one of these events please call 928-771-3122.

The 2018-2019 flu season, while milder than the previous season, was the longest flu season in a decade, at 21 weeks, according to the Center for Disease Control. Approximately 8% of the American population gets sick from the flu each year, with a range between 3-11% depending on the severity of the viruses circulating that season.

With flu season getting longer, it’s important to get your flu shots early. If you think it’s possible to get the flu shot too early and limit the coverage of the vaccine, the CDC says it’s safe to get the vaccination whenever the vaccine becomes available.

The flu shot’s overall effectiveness varies from year to year, according to the CDC. The protection you’ll get from the shot depends on your age and health, as well as the similarity or “match” between the virus(es) in the vaccine and those that are circulating during the season. Recent effectiveness studies show that flu vaccination reduces the risk of flu illness by between 40 percent and 60 percent among the overall population during seasons when most circulating flu viruses are well-matched to the shot.

The CDC recommends everyone 6 months and older be immunized against the flu to prevent the spread of the virus. Certain groups are at greater first for complications: people with diabetes, pregnant women, adults over 65, children younger than 5, those with asthma and other chronic lung diseases, those with kidney and liver disorders, heart disease patients, and those with compromised immune systems.

The single best way to prevent the flu is to get a flu vaccination every year. The flu shot is approved for use in people 6 months of age and older, including healthy people and people with chronic medical conditions. It is still beneficial for anyone who was not vaccinated in early fall to get vaccinated later in the fall or winter because most influenza activity typically occurs in January or later. Though it varies, flu season can last as late as May, so it is never too late to get vaccinated.

The CDC recommends that everyone six months and older, especially people at high-risk for flu-related complications, get a yearly flu vaccine “preferably by the end of October.”

Those at high-risk include:

• Pregnant women (and women up to two weeks postpartum).

• Residents of nursing homes and other long-term care facilities.