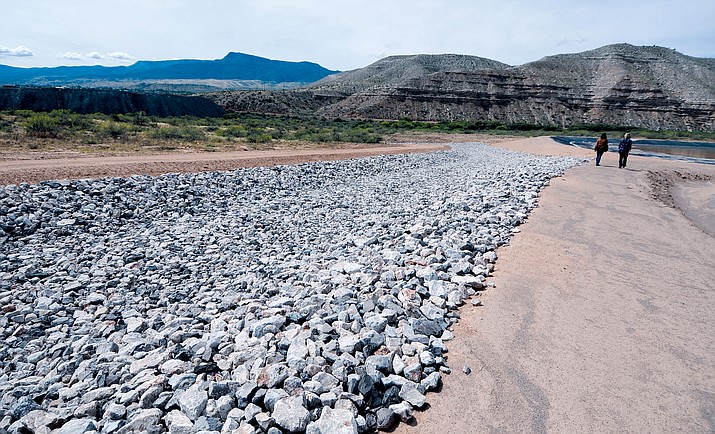 The contaminated soil from yards in Clarkdale will be dumped into the soil repository which has an impenetrable liner. Freeport has performed extensive storm-water drainage work at the site to ensure that water does not run downhill to the Verde River during storms. VVN/Vyto Starinskas

CLARKDALE -- A new contractor has been selected for the United Verde Soil Program in Clarkdale and residential yard cleanups should resume this fall.

That’s according to Freeport Spokesman James Telle, who said on Monday that USA Environmental, based in Texas, will be mobilizing equipment in Clarkdale soon.

The voluntary soil cleanup program came to a sudden halt in 2018 when the Freeport-hired clean-up crews pulled out of town after cleaning up soil in Main Street Park and yards of approximately 50 homes. Freeport replaced the soil and landscaping at those homes.

The cleaned-up, contaminated soil was stored at a temporary site on Sycamore Canyon Road, but now that soil has been moved a newly approved permanent site down the same road near the TAPCO parking lot where kayakers put in their crafts into the Verde River.

Tuesday, contaminated soil from Clarkdale was piled up along the inside edge of the repository liner.

The contaminated soil from yards in Clarkdale will be dumped into the soil repository which has an impenetrable liner. Freeport has performed extensive storm-water drainage work at the site to ensure that water does not run downhill to the Verde River during storms.

The soil clean-up project and soil repository site are overseen by the Arizona Department of Environmental Quality.

The goal of the voluntary United Verde Soil Program is to clean up the property from smelter-related impacts to the soil in Clarkdale from the former smelter, which operated until 1953. Freeport is offering soil replacement and restoring of the landscape at no cost to property owners,

Tuesday, Freeport staffers took local officials for a tour of the soil repository liner, which is several hundred yards up a new work-road from Sycamore Canyon Road. However, it can’t be seen from the road.

The repository is six acres and the stormwater basin is two-acres, Freeport Senior Engineer Shane Gill, who spend the last six months building the soil repository. “The design of the repository has taken into consideration a 100-year, 24-hour storm event,” he said. “It’s a lined facility.”

Currently, there is a foot of clean cover soil material imported from a sand and aggregate facility over the liner and the contaminated soil will be dumped onto the soil and liner, he said.

Eventually, the liner and contaminated soil, when the Clarkdale clean-up is complete, will be capped with a soil cover system that meets certain requirements and any water that seeps through the top soil will be captured with the liner, explained Freeport Chief Engineer Lynn Lande.

“As of September 2019, owners of approximately 80 percent of properties within the Clarkdale study area have elected to participate in the UVSP. All but a few of these properties have been sampled, and approximately 50 have had their soil replaced and landscaping restored,” Telle said in his email.

Freeport will still accept requests from property owners to participate Telle said. Freeport operates an Outreach Office at 200 N. Broadway in Clarkdale that is open to the public and representatives are available to answer questions in person, by phone at 928-649-3614, or via email at UVSP@ghd.com.