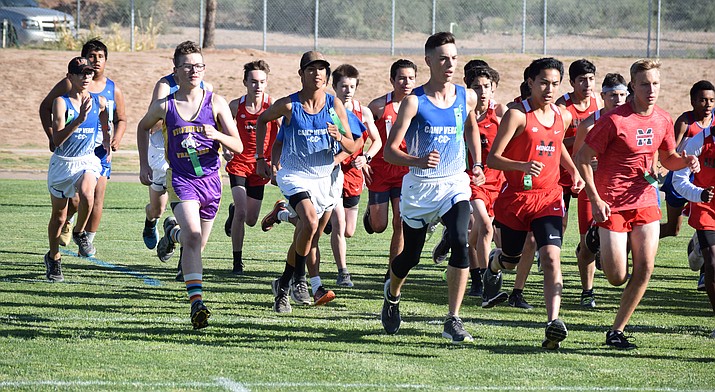 Senior Alondra Fowler was the top runner for the Cowboy girls at the Camp Verde XC Invitational, finishing ninth with a PR of 24:55. VVN/James Kelley

Camp Verde High cross country hosted its annual meet on Saturday and the Cowboys notched a number of personal records.

All three of those were personal records.

“The meet for the boys went well,” CV head coach David Castillo said. “There was some fast times, a lot of kids with PRs, only one of the boys didn’t get any person record. We had a change of course this year. The start/finish was in the same spot, it didn’t really change a whole heck of a lot but it changed the dynamics of where people could watch the course, so it was good.”

Senior Alondra Fowler was the top Camp Verde girls runner, finishing ninth in 24:55. She’s a defender and midfielder on the soccer team, which is also a fall sport.

“The girls did awesome as well, every single girl that ran had PRs, they bettered their times,” Castillo said. “We actually welcomed Alondra from the soccer team this week. She did a great job, she actually was our number one runner.”

It was Fowler’s second race for the cross country team. Previously she took 16th at Wrangler on Sept. 4 in 47:23.

“She’s a natural runner,” Castillo said. “She has a natural ability to excel in no matter what she does. There is of course some running in soccer, but it’s not the same whenever you’re out there running a 3.1 mile course and the different strategies that go with it. She did an excellent job and coming fairly untrained to the sport, she did a great job for the team.”

Ritzenthaler was the fourth best senior on the boys side. For the girls, Elio was the third fastest junior and Backus the fifth junior. Fowler was the second fastest senior.

Senior Salat Ibrahim from Phoenix Alhambra won the boys race with a mark of 16:56. Sophomore Amity Hall from Benson won the girls race with a time of 21:21.

Benson finished first for the girls and Alhambra won the boys team title.

“Everybody ran some fast times,” Castillo said. “This meet here is pretty much one of the kinda true cross country courses because there’s some rocky, it’s not like running on the golf course, there’s some hills, there’s rocky, there’s just different level ground and a lot of kids usually come here and they’ll run a little bit slower because they’re maybe a little bit hesitant on the rocks and stuff like that but we had some kids doing some fast times, the winning time was 16:58, a kid from Alhambra and his coach came up to me before the race and said ‘okay what’s the course record?’ and I kinda had to tell him it’s a new course but he wanted to gun for the time that one of the kids last year, from Centennial got that course record. So he was gunning for a good time, it was great.”

The Cowboys head to the Phoenix Classic – Showdown at Sundown on Oct. 4. They ran five meets from Sept. 4 to 21.

“We’re a little bit more spread out,” Castillo said. “We have pretty much a meet a week from here on out. We’ll head to Phoenix, it’s kind of a night time run, it’s the Phoenix Classic, it’s at Crossroads Park.”