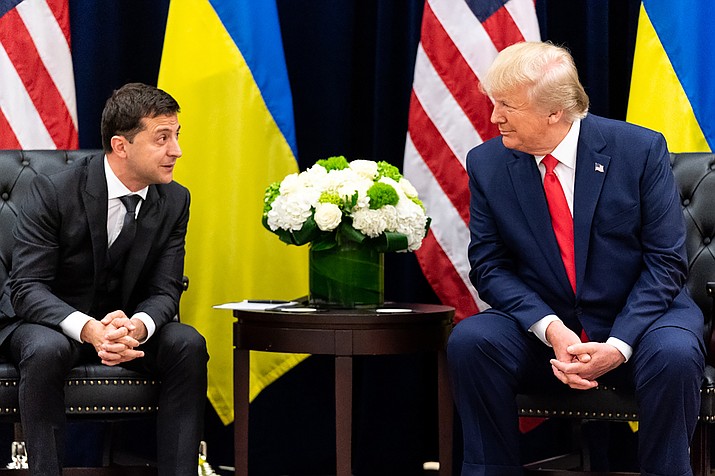 President Donald Trump meets with Ukrainian President Volodymyr Zelensky at the United Nations. Trump’s July call to Zelensky has become the focus of an impeachment inquiry by the House. (Photo by Shealah Craighead/White House)

WASHINGTON – Arizona lawmakers agreed Wednesday that President Donald Trump must turn over documents in the latest probe of his administration, even as they disagreed on what those documents mean and how the investigation should proceed.

After hours of bitter partisan debate, the House voted 421-0 Wednesday to demand that the White House release the report of a whistleblower who said Trump tried to pressure Ukrainian President Volodymyr Zelensky to investigate former Vice President Joe Biden, a potential Trump rival in 2020.

The vote was the latest in a two-day whirlwind of activity over the incident. It included House Speaker Nancy Pelosi announcing a formal impeachment inquiry of Trump on Tuesday and the White House turning over a partial transcript of the Ukrainian call Wednesday – and later, the whistleblower report itself, which the administration had earlier withheld.

The Senate had also voted unanimously Tuesday to demand to see the whistleblower complaint.

The votes were the only agreement in what has been two days of partisan sparring.

Rep. Andy Biggs, R-Gilbert, said the president’s decision to release a partial transcript of his July 25 call with Zelensky is an act of transparency that clearly shows no wrongdoing by Trump.

“The Democrats’ frenzy over the contents of this unknown phone call will go down in history as one of the worst rushes to judgment in American history,” Biggs said in a statement.

In the transcript, Trump is quoted as saying he would like Zelensky “to do us a favor,” by asking him to investigate Biden, among other requests. The president urged Zelensky to work with his personal attorney, former New York City Mayor Rudy Giuliani, and with Attorney General William Barr, adding that “whatever you can do with the attorney general would be great.”

Trump insisted this week that the transcript clears him, but Democrats who looked at the document called it incriminating.

Rep. Ann Kirkpatrick, D-Tucson, said in a tweet that the documents released so far show that Congress needs to continue its investigations and its push to make more information public.

“Congress has the constitutional authority to investigate these reports and the full complaint must be made public to the American people,” Kirkpatrick’s statement said.

Pelosi said on the House floor Wednesday that the president should release the full transcript of the call.

She urged House members to support the vote that she called “a bipartisan vote to defend our national security and to protect our democracy.”

Even though they supported the resolution, House Republicans disagreed with how the Democrats are treating Trump. Rep. Steve Scalise, R-La., in a passionate statement on the House floor, accused Democrats with jumping to conclusions before getting the full story.

“People are sick and tired of the constant harassment of the president,” Scalise said.

But Rep. Eric Swalwell, D-Calif., said the transcript makes clear that Trump asked for a favor that Zelensky will ask to have returned one day, putting the interests of a foreign country before the United States.

“When you ask someone to do a favor, you owe that person in return and that person is a foreign leader,” Swalwell said.

A move by House Minority Leader Kevin McCarthy, R-Calif., to disapprove of Pelosi’s call for an impeachment inquiry was rejected 232-194, on a straight party-line vote.

Rep. Tom O’Halleran, D-Sedona, said the jury is still out. He said he will not jump to conclusions while he awaits the full report, but that the investigation needs to proceed. Only then will he make a decision about whether the president needs to be impeached.

“The memo released by the White House this morning reinforces the need for this investigation to continue,” O’Halleran said in a statement. “My vote on this matter will be based on the evidence gathered during the inquiry process.”