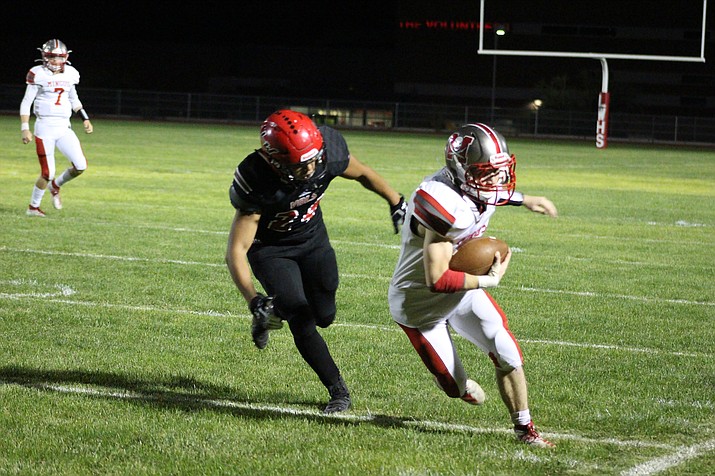 KINGMAN — The Lee Williams High School football team waited five long years for this day to arrive and it finally did Friday night.

The Vols had never beat Mingus in program history, but put four straight losses in the rearview mirror with a 42-27 win over the Marauders.

“Every single year we play them they always find a way to punch us in the mouth and keep us down,” said Lee Williams senior Donnie Simms. “So it feels really good to finally say, ‘we won this one.’”

Simms and Wesley Boyd played a big role in the victory as the pair combined for more than 200 yards rushing and three fourth-quarter touchdowns that clinched the victory.

And all three scores were on plays of 40-plus yards, highlighted by Boyd’s 66-yard scamper on the first play of the fourth quarter that gave the Vols a 28-7 lead.

“We faked the toss on the outside and I just snuck under there,” Boyd said. “The line did a great job blocking everyone and there was a clean hole and green grass in front of me.”

That was just the start of more as Lee Williams’ offensive line allowed Simms to pull away for a 50-yard touchdown run and then Boyd put the game on ice with a 43-yard run for a 42-21 advantage with 3:26 to play.

“We just stuck to our game plan,” said Vols head coach Patrick O’Boyle. “We told our offensive linemen to stay on their blocks – ‘we’re about to spring one.’ In the first half, we were just falling off a little bit. They trusted the system, they trusted each other and we saw some big runs. Our receivers did a really nice job blocking downfield along with the running backs running hard. It was a lot better effort from us playing completely as a team this week.”

“These kids have been in this position all year long – they’re a bunch of fighters and they’re not willing to quit and give up,” said Marauders head coach Robert Ortiz. “When the third and fourth quarter starts to hit, you get a little tired and you get one or two guys out of position. Hats off to the Lee Williams coaching staff – they went in and made adjustments according like they should.

“They found where our weaknesses were defensively and they just did a good job attacking it. And when you have one or two kids out of position, you saw the result.”

Despite the lopsided score, Mingus kept it interesting in a back-and-forth fourth quarter that featured a combined 41 points.

Zachary Harrison made sure the Marauders didn’t go down without a fight as the sophomore three touchdown passes in the final quarter - two to Peter Calandra and one to Dakota Falcha with 1:18 remaining.

However, it was too little, too late as time ran out.

“We had plenty of opportunities early,” Ortiz said. “We missed three times in the first half – so shoulda, coulda, woulda – the score could have been 28-14 at the half. We’re up two scores just that easy. We’re missing guys open and not sustaining blocks long enough – making minor fundamental mistakes that can be cleaned up. It’s a different guy every time. It’s never the same guy. And when that happens consistently, you get the result that you’ve seen tonight and the previous weeks.”