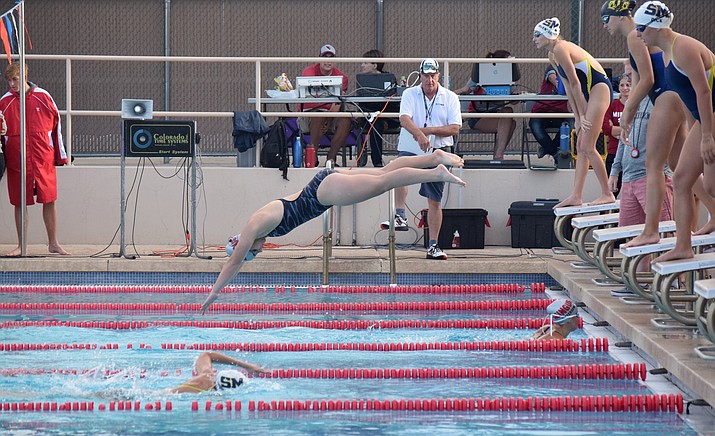 Mingus senior Zoey Arwine dives into the pool during the 200-yard freestyle relay on Thursday at the Cottonwood Aquatics Center. VVN/James Kelley

Another state qualifier and another home meet yielded familiar results for Mingus Union swimming, except for one case.

It’s the first draw Mingus Union head coach Gretchen Wesbrock had been a part of she thinks and she couldn’t believe it when she saw the final tally.

“Well I guess when you tie it’s technically still a win, right?” Wesbrock said. “You’re still undefeated, so we had three teams that we competed against and Mingus tied against Prescott, won against Winslow and won against Shadow Mountain. So what’s really cool about that too is that Shadow Mountain’s in our division, so is Winslow but Prescott’s in Division II, so it’s really neat to see our kids have competition and do well with it.”

The Marauders picked up the wins and draws despite being a little short handed as swimmers stepped up and competed in unfamiliar events.

On Sept. 21 the Marauders went to their second of four state qualifier meets at Brophy/Xavier Swim Invitational in Phoenix.

Wesbrock said it was a “fantastic” meet.

“We had more provisional times, our girls had an automatic, so all three of the girls relays are automatically qualified for State,” Wesbrock said. “More provisionals, so we are sitting in a really good spot. We got a couple weeks now before we head to our next qualifier, it’s after fall break that we’ll go and then we’ve got two back to back and then we’ll be heading into State after that. “So I’m so excited for these kids and where they’re at, they’re training really hard but they’ve also come together as a team so nicely, they’re so inclusive. You’ve got these swimmers that are state bound and these swimmers that it’s their very first season and yet everybody is a part of this team and everybody feels apart of this team and I just think that is what we’re going for here.”

Here’s the highlights of the Brophy and Xavier meet:

On Thursday at the friendly confines of Cottonwood Aquatics Center, the Marauders host Flagstaff, Winslow and Phoenix St. Mary’s at 4 p.m.