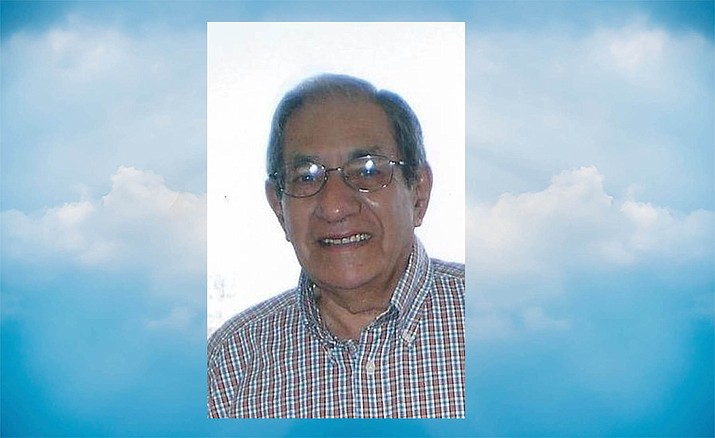 Frank was born in Clarkdale, Ariz. to Raquel Valencia and Manuela (Nellie) Lopez on June 15, 1924.

Frank resided in Glendale for the past 36 years. He attended school in Clarkdale and graduated from Clarkdale High School in 1942.

He attended Arizona State Teachers College in Flagstaff on a basketball scholarship. Frank was a World War II veteran and served in the Army Corps of Engineers after special training at Boston College, serving in France and Germany.

Frank was the recipient of two Battle Star medals for the Ruhr Pocket and Rhine River Battles and the Medal of Freedom from the French government.

After returning home from the war Frank met the love of his life, Lucy (Medina), and they married in 1947. Frank worked for Phelps Dodge Corporation in Clarkdale until 1950 when he was transferred to work at the new smelter in Ajo.

Frank served as President of US Steelworkers Local Union for many years advocating for miners’ rights. Frank and Lucy lived in Ajo until he retired in 1983 and moved to Glendale. Frank was employed at the Thunderbird Graduate School of International Management in Glendale for ten years, retiring in 1994. Frank enjoyed family gatherings, golfing, traveling, gardening, woodworking and following sports, especially baseball and basketball. He is preceded in death by his wife, Lucy; daughter, Grace; and his sister, Rosie Carrillo. Frank is survived by his sisters, Margaret Limon (Ernest), Jessica Ortiz (Tony); daughters Rachel Ramirez (Arnoldo), Frances Miller (Philip), Theresa Federico (Mike), Valerie McMahan (Todd); and son Frank Jr. (Joette). Frank will be lovingly missed by nine grandchildren, 15 great-grandchildren and many nieces and nephews. Interment will be at National Memorial Cemetery of Arizona, Phoenix. In lieu of flowers the family suggests donations to Arizona Dept. of Veterans in memory of Frank Valencia.