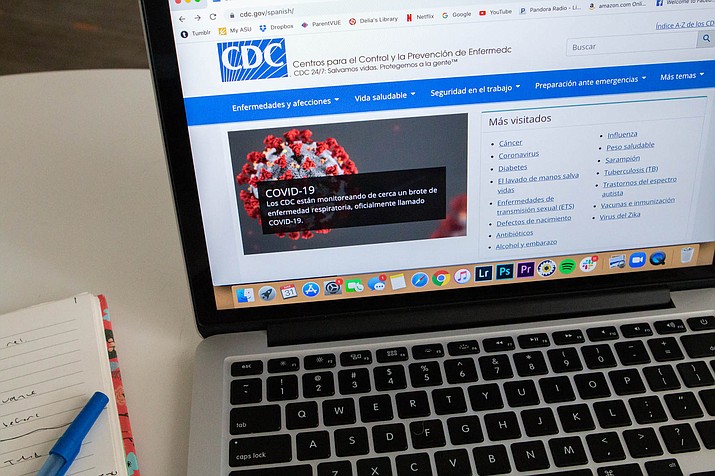 The CDC provides information about COVID-19 for residents of the United States who don’t speak English. (Photo illustration by Delia Johnson/Cronkite News)

PHOENIX – On March 16, the White House and the Centers for Disease Control and Prevention issued a public alert aimed at preventing the spread of COVID-19.

The problem: For days, it was in English only – leaving millions of non-English speakers in the U.S. without direct guidance from the federal government amid the deadly and fast-moving pandemic.

With federal officials facing criticism over delays in translating vital information about the novel coronavirus that causes COVID-19, organizations and local governments have stepped in to fill the void – taking to TV and social media to offer their own translations of guidelines into Spanish, American Sign Language, Chinese, Arabic, Korean and other languages.

Advocates in states from Alabama and Kentucky to California and Arizona are calling for leaders to do more, prompting some at the local level to translate coronavirus information on their own.

Weeks ago, members of the House Congressional Tri-Caucus called on the CDC to offer accessible translations of materials related to COVID-19 in all major languages spoken in the United States, including Spanish, Chinese, French, Tagalog, Vietnamese, Korean, German, Arabic and Russian.

“In looking out for the well-being of all Americans, we must ensure that everyone living in this country has access to life-saving information that could help prevent or delay the spread of this virus,” stated a letter signed by members of the Congressional Asian Pacific American Caucus, the Congressional Black Caucus and the Congressional Hispanic Caucus.

As the number of confirmed cases continues to climb, governments in such states as Ohio, Michigan, Massachusetts, Texas and Colorado have gone beyond what the CDC is providing, translating information in Arabic, Burmese, Portuguese, Haitian Creole, Nepali and more.

According to census data, more than 65 million people in the U.S. speak a language other than English at home, and about 25 million – or 8.5% of the population – speak English “less than very well.”

In Arizona, more than a quarter of the population speaks a language other than English at home, and nearly 21% speak Spanish.

With an especially large Spanish-speaking population, Arizona organizations, media and local government offices are working to provide accurate bilingual information and resources about the virus, which was discovered in central China in late December. The first U.S. case was reported in late January, according to the CDC.

Phoenix spokesman Alejandro Montiel, noting that more than 40% of the city’s population is Hispanic, said it’s just as important to communicate with them as it is with all Phoenix residents.

The city has released bilingual COVID-19 advisory flyers and has a Spanish-accessible website. Information in other languages is available upon request, Montiel said.

Adriana Garcia Maximiliano, chief of staff for City Councilman Carlos Garcia, said her office is working to translate any COVID-19 information into Spanish but that with the constant flow coming from federal, state and city sources, it has been hard to keep up. Garcia’s east and south Phoenix district includes many Spanish speakers.

“There’s so much information coming in,” she said. “There’s so much misinformation out there as well. I think it’s important for folks to be able to rely on the officials to provide them their information. … It’s unfortunate that the administration has not put a priority on that. We have a very diverse country.”

Many Latino families depend on Spanish-language media for news, and the Spanish television network Univision is offering daily coronavirus updates in multiple formats.

“In general, news and information is extremely important to live your life, but especially in cases like this,” he said.

Univision has been airing an expanded news program and created a one-hour segment specifically dedicated to COVID-19.

“We have a very close relationship with the community and with our audience, but it’s especially important in times of crisis when the community needs trustworthy, accurate national and local information,” Zamora said. “Univision really becomes a sort of lifeline.”

Local organizations also play a role in informing the community.

Puente Arizona, a grassroots migrant justice organization based in Phoenix, created a list of COVID-19 resources for its largely Spanish-speaking community.

Isis Gil, the group’s development and financial director, said the people Puente serves rely on community interaction, which is now limited because of the coronavirus outbreak.

“We’re all in a point of trauma and genuine fear and panic, despite the fact that that’s not what we should be at,” Gil said. “Our people, as non-English speaking, undocumented individuals, are falling way beyond the threshold of actually getting help.”

Not providing resources in their native language isolates the population, according to Gil. If the crisis continues, a lack of communication of government-suggested procedures could lead to that population putting themselves and others at risk.

Gil noted that many Hispanics rely on social programs to help them survive, such as school lunch programs or daycare services, so understanding how the outbreak affects those programs is a necessity.

The Arizona Department of Health Services published its Spanish-language COVID-19 site on March 20, almost two months after the English website was created. On March 22, Gov. Doug Ducey announced the launch of a 2-1-1 phone hotline to relate information about COVD-19 in both English and Spanish.