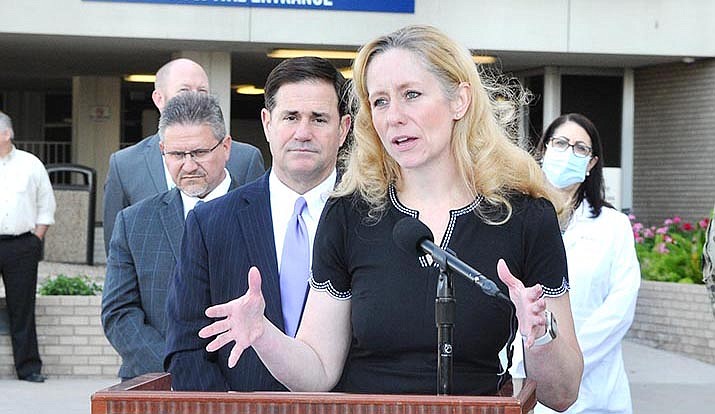 PHOENIX - Arizonans will soon know whether their neighbors are getting sick and dying from COVID-19.

Beginning Sunday, the state Department of Health Services will start listing race and ethnic information on those with confirmed diagnoses of the virus.

There also will be information on the location of patients by zip code.

And deaths will be recorded by age and gender -- but not necessarily with the same geographic precision. The issue, said agency spokesman Chris Minnick, is privacy.

"If there are very few cases that would more likely to make it identifiable, they will not be included,'' he said. Minnick said the details of how that would be handled -- and where would be the cutoff for deaths by zip code -- are still being determined.

The zip code map can be found here.

Those reports may not be fully accurate at first.

State Health Director Cara Christ noted that it was only this week that Gov. Doug Ducey issued an executive order requiring hospitals to provide more information to the state about their cases. And what's been available so far, she said, doesn't have complete reports from the hospitals.

"It had a lot of unknowns and a lot of blank entries,'' she said.

And even what does show up Sunday, Christ said, "won't be 100 percent complete'' because the hospitals are not due to file their first reports until Friday. (eds; today).

But Minnick said that, when fully functioning, the web site will have all the data going back to the first reports of illness and death.

Ducey also said that his order earlier this week also requires reporting of the number of ventilators in use and how much in personal protection equipment -- masks, gowns and gloves -- is being used each day, along with current inventories.

The move is likely to blunt litigation filed by Rep. Kelly Townsend, R-Mesa, and other elected officials who want a Pinal County judge to order the Department of Health Services "to immediately release all prior (and ton be obtained) general and non-personally identifiable information'' about the detection, reporting, prevention and control of COVID-19.

It also seeks information on testing practices, pending results, number of patients hospitalized, number of ventilators available and how many are required.

That data, however, will be available only on a statewide basis.

The announcement came as Christ and the governor took a quick tour of efforts by the Army Corps of Engineers to put St. Luke's Medical Center in Phoenix back into service. It shuttered late last year after hospital officials said that, on average, only one bed out of every three was being occupied on any given night.

Ducey said that the pandemic has changed the medical landscape.

"St. Luke's will be reopening its doors with 339 ICU high-acuity beds, with flexibility for other needs as the situation on the ground unfolds,'' he said. "These beds will provide additional surge capacity for Maricopa County.''

This comes as state health officials say the number of confirmed cases should peak sometime this month, with hospitalizations hitting their own peak in May. Ducey said the St. Luke's beds should be available within three weeks.

Both Ducey and Christ came out of the hospital after the tour and conducted Thursday's press briefing without face masks. This is of note as Christ, who a week earlier said masks were not necessary for those who are healthy, said earlier this week that she now advises people who do go out to wear them.

That follows similar advice from the Centers for Disease Control and Prevention which said that people who have the virus may not have symptoms but yet may be able to spread the virus. Wearing masks helps stop that.

Ducey, who said he has not been tested to see if he is infected, said that CDC guidance was just "a recommendation.''

"How I've read the guidance is that if people want to wear a mask, where they'd like people to wear a mask, is if they're outside and they cannot socially distance,'' the governor said. "If I find myself in that situation, I'll be wearing masks and I have masks available.''

And he brushed aside a question about the fact that he, a member of his security detail and staffers are being driven around in a closed vehicle, with none of the occupants wearing a mask.

"We have masks available,'' Ducey said.

A question to Christ's press aide about her decision not to wear a mask was not immediately returned.