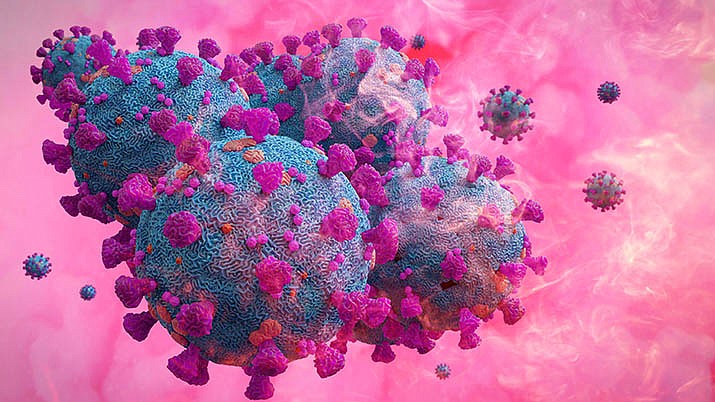 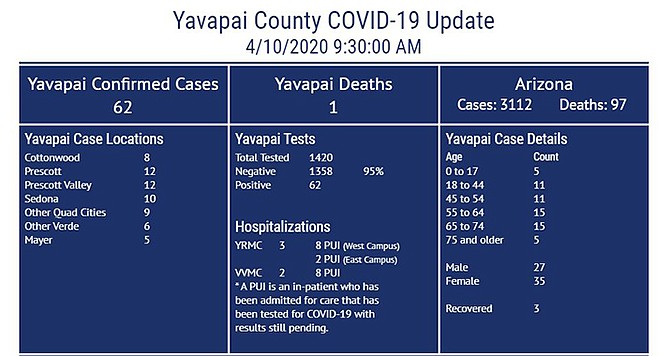 Friday morning’s good news is that the total of reported COVID-19 cases in Arizona didn’t jump as much Friday as it had on Thursday.

However, the 94 new cases announced Friday morning by the Arizona Department of Health Services were not exactly encouraging.

The increase in cases is according to the Friday morning report on the Arizona Department of Health Services website, azdhs.gov. That’s not nearly as rough as the Thursday morning report of 292 new cases, the greatest 24-hour leap statewide during this crisis.

ADHS says there are now 3,112 confirmed cases in Arizona with 97 total deaths; there were eight new deaths reported for the second consecutive 24-hour cycle.

As of 10 a.m., Friday, April 10, Yavapai County Community Health Services reports on its website, yavapai.us/chs, with its 62 reported cases split between 24 in the Verde Valley and 38 in the Prescott / Prescott Valley / Quad Cities corridor.

As was the case Wednesday and Thursday morning, Friday morning’s report from Yavapai County Community Health Services shows Sedona has 10 confirmed cases; Cottonwood, 8, with other areas in the Verde Valley making up the remaining six local cases.

There has been one confirmed COVID-19 death in the county. It came from a Verde Valley patient last weekend.

There have now been 1,420 people tested in Yavapai County with 95 percent— 1,358 — of those tests coming back negative.

Friday morning, Verde Valley Medical Center reported a hospital census of 39 patients in the 74-bed hospital, with two patients in-house confirmed to have coronavirus. There are eight patients with test results pending at VVMC.

There are six patients in critical care at the hospital, as of Friday morning.

There are 10 COVID-19 patients hospitalized in Prescott or Prescott Valley facilities.

Flagstaff Medical Center currently has 141 patients, 45 of which are positive for COVID-19 with 31 pending tests and 43 patients in critical care, as of Friday morning.

The highest concentration of cases in Arizona continues to be in Maricopa County with 1,741 cases, as of Friday morning — 72 more cases than reported Thursday.

There are now 543 confirmed cases in Pima County with Navajo and Coconino counties having the next-highest total with 287 and 214 cases, respectively.

The largest number of confirmed cases in Arizona continues to be in the 20- to 44-year-old demographic with 1,129 cases statewide. This age group also has been tested with far more frequency than any other demographic with 16,186 tests, according to ADHS. There have been 18,881 tests done statewide on people 45 and older.

Fifty-three percent of the confirmed cases in Arizona are women, 47 percent men.

The ADHS Thursday morning report states 37,734 Arizonans have been tested for COVID-19. Consistently, 93 percent of those tests come back negative for coronavirus.

The Centers for Disease Control and Prevention reports the U.S. caseload is at 427,184. The virus is present in all 50 states, District of Columbia, Puerto Rico, Guam, the Northern Mariana Islands, and the U.S. Virgin Islands, according to the CDC.

How do people get infected with COVID-19?

Viral droplets transmitted from an infected person’s cough or sneeze enter through your nose, mouth or eyes - the usual entry points for respiratory viruses. Even if they don’t cough or sneeze directly on you, you may get the virus if you touch something an infected person recently touched and then touch your face, nose, mouth or eyes. From there, it travels to the back of your nasal passages and to the mucous membranes in the back of your throat. That’s the place where symptoms -- such as a sore throat and dry cough -- often start. Then the virus spreads down the airway passages to the lungs. When the lungs’ membranes become inflamed, it’s harder for them to work properly.

In addition to causing problems in the lungs, the virus may also cause nausea, diarrhea or indigestion if it infects cells in the gastrointestinal system.

It can take as few as two or as many as 14 days after being exposed to the COVID-19 for the first symptom to develop. The first symptom of COVID-19 is usually a fever. Then come respiratory symptoms, like a dry cough and shortness of breath, that often turn into pneumonia. The worst cases often lead to respiratory failure, which could result in death.

YCCHS limiting immunization appointments except for infant or respiratory vaccines. 771-3122.

Yavapai County WIC offers all services online or by phone to existing or new clients – call 771-3138.