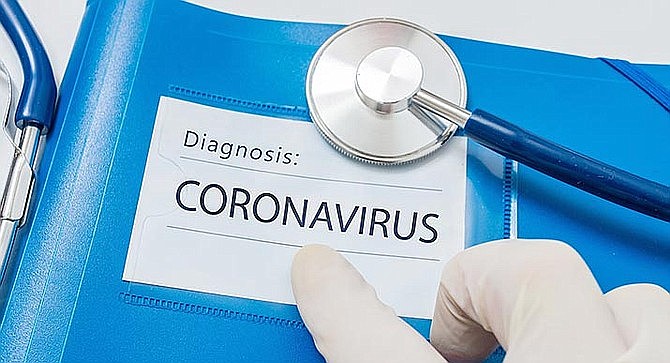 PHOENIX – Leaders of the Navajo Nation are self-quarantining after being exposed to a COVID-19 patient amid an outbreak that has killed more than 20 members of their tribe.

President Jonathan Nez and Vice President Myron Lizer were in close proximity to a first responder on Tuesday who later was confirmed positive for the novel coronavirus, according to a press release from the Navajo Nation. Nez and Lizer said they are “feeling fine,” but will continue self-quarantining as a precaution, Thursday’s press release said.

“This is real and no one is immune from contracting the virus,” Nez said during a Facebook live news conference Thursday. “We will continue to help fight for our people while we self-quarantine. This is a precautionary measure.”

The tribe noted that Nez and Lizer each took precautionary measures by wearing gloves and masks in every visit to communities during the outbreak. Both will also continue their duties through “teleconferences, email and other means of communication.” In addition, other tribal employees have been instructed to self-quarantine.

The tribe has 558 reported cases and 22 deaths among Navajos on the reservation, compared with 13 deaths in the entire state of Utah, which has a population 17 times larger.

The virus has raced through the sweeping reservation in New Mexico, Utah and Arizona, which is home to 173,000 Navajos, in part because of factors such as a shortage of running water, the prevalence of certain health conditions, including asthma and diabetes, and homes with multiple generations living under one roof, health officials said.

Some of the challenges faced by the tribe were addressed Friday by Surgeon General Jerome Adams at a White House news conference. He noted that given the lack of basic, routine sanitization, the odds have been stacked against the Navajos since the outbreak began.

“We tell people to wash their hands,” he said, “but a study showed that 30 percent of homes on Navajo Nation don’t have running water, so how are we going to do that? Let me be crystal clear, we don’t think people of color are biologically or genetically predisposed to get COVID-19. There is nothing inherently wrong with you. But they are socially predisposed o coronavirus exposure and have a higher incidence of the very diseases that put you at risk for severe complications of coronavirus.”

As of Friday, April 10, the Arizona Department of Health Services reported 3,112 cases of COVID-19 in Arizona and 97 deaths. It said 37,734 tests for COVID-19 have been completed in public and private labs in Arizona and results were negative in 34,935 cases.

“We will overcome COVID-19 together, but it’s up to each of us whether that will be sooner or later,” he said in a press release. “The more people continue to go out into public, the longer we will have to stay home. Now is the time to get prepared for the 57-hour curfew.”

The weekend curfew for the reservation runs 57 hours from 8 p.m Friday until 5 a.m. Monday. Lizer said the extreme measure is necessary to guarantee self-isolation throughout the reservation because the trib’s health care system can’t manage the growing numbers of patients.

“The latest virus projections show that we have not reached the peak, or the highest number of cases, so please stay home and abide by the curfew order,” he said.

Arizona to receive 100 ventilators from stockpile

On Friday, Gov. Doug Ducey tweeted that the state is “grateful” to receive 100 ventilators from the Strategic National Stockpile, which will be deployed to the state’s “critical need areas.” Included on that list are tribal communities, such as the Navajo Nation.

“Our tribal communities remain top of mind: I’ve been in touch with Navajo President Nez and Vice President Lizer about the need for supplies, personnel and ventilators. Arizona is committed to assisting ALL our tribes as they fight #COVID19,” Ducey wrote on Twitter.

The Arizona Department of Health and the Arizona National Guard will assist the Federal Emergency Management Agency with distribution. It’s unclear when the machines will arrive.

No additional information about the inmate was released, but officials said they have started separating inmates with flu-like symptoms from the rest of the prison population. Of more than 42,000 Arizona inmates, 68 have been tested, 58 have tested negative, seven tests are pending, and three have now been confirmed positive, the Arizona Republic reports.

Researchers in Arizona analyzed the genetic makeup of more than 100 samples of the new coronavirus from patients with COVID-19 and have pinpointed one dominant strain of the virus circulating across the state. The strain, which established itself in Arizona in early March, appears to be connected to strains from Europe, according to Michael Worobey, head of the University of Arizona’s Department of Ecology and Evolutionary Biology.

“Functionally, we think all of these viruses have had the same ability to infect people. So when you see a dominant lineage, it’s just telling you that by chance, one got in early and got a foothold,” Worobey told the Arizona Republic.

Because vaccines target specific parts of a virus’ genetic code, Paul Keim, executive director of Northern Arizona University’s Pathogen and Microbiome Institute, said this information is critical to track and will allow researchers to stay ahead of the virus.