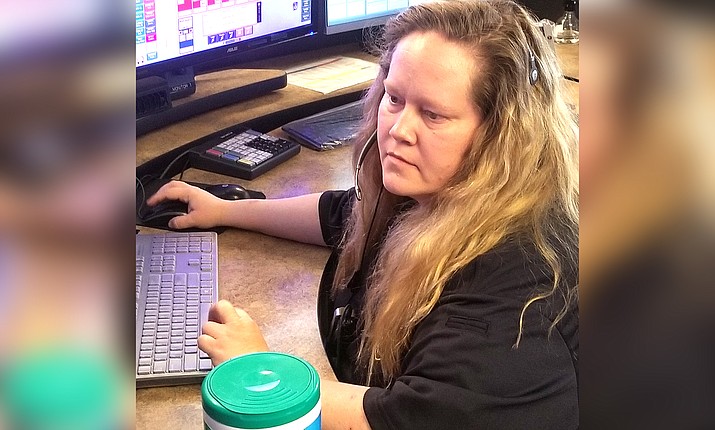 Jennifer Noss looks over a screen at the Cottonwood Public Safety Communications Center. As we observe National Public Safety Telecommunicators Week, we look at how the role of the emergency dispatcher is more critical than ever during the COVID-19 pandemic. Courtesy of Cottonwood PD

COTTONWOOD — If you’ve called 911 or any first-responder agency over the past month, you might have been asked some questions you weren’t asked in the past.

April 12-18 is National Public Safety Telecommunicators Week, when we honor dispatchers and others who help first-responders get information they need, when they need it, we take a look at the challenges dispatchers face in the COVID-19 era.

“The CPSCC is a division of the Cottonwood Police Department,” Carpenter explained. “The center is a primary 911 answering point for the City of Cottonwood, the Verde Villages, Cornville, the Village of Oak Creek, Lake Montezuma, Rimrock and other unincorporated areas throughout Sedona and the Verde Valley.”

The CPSCC is also a secondary 911 answering point for the City of Sedona, the Town of Camp Verde and for Gila County, where Payson is located. It takes overflow 911 calls from those jurisdictions and receives transferred 911 calls from primary centers in those places.

Since July 2014, CPSCC has utilized call processing protocols established by the International Academies of Emergency Dispatch for Fire, EMS, and Law Enforcement calls.

“The protocols for processing medical calls includes an Emerging Infectious Disease Surveillance Tool, or EIDS tool, and has been utilized in the past during the concerns surrounding SARS and Ebola,” Carpenter said. “On Jan. 24 of this year, the International Academies of Emergency Dispatch sent out an official statement to public safety communications centers — utilizing IAED protocols — informing us of the centers of concerns and issues related to a coronavirus.”

Carpenter said the IAED also recommending using the EIDS Tool to screen patients so first responders can be informed to don additional personal protective equipment, or PPE, prior to making patient contact.

“After consulting with our medical director and local EMS providers, the CPSCC dispatchers were given direction to utilize the EIDS tool for callers reporting breathing problems or general illnesses,” she said.

If there were any positive indicators of the coronavirus, dispatchers are to inform the first responders that “additional PPE is recommended.”

• Have you traveled to Wuhan, China within the last 14 days?

• Have you had contact with a known person testing positive for the coronavirus?

• Have you traveled through an international airport within the last 14 days?

• Are there any fever and respiratory symptoms (additional specific symptom questions would follow).

On March 12, the center’s protocol software was updated to include the newest version of the EIDS tool available only in the medical protocol software. IAED implemented changes to the EIDS tool that uniquely addressed coronavirus symptoms and aligned with the Arizona Department of Health Services recommendations.

The questions included in the tool are:

• Have you had contact with someone with flu-like illness? If so, when? If so, is that person a healthcare worker?

• Measured body temperature greater than or equal to 100.4 Fahrenheit, 38.0 Celsius?-

• A fever, hot to the touch in room temperature? Chills?

• Difficulty breathing or shortness of breath?

Callers who provide a positive indication of coronavirus are given these instruction: From now on, don’t allow anyone to come in close contact with her/him.

Dispatchers then alert any applicable first-responders and EMS providers that additional PPE is recommended for that caller or party, such as a face mask, gloves, eye protection or a gown.

On March 18, the Cottonwood center modified its operations to include EIDS screening on all calls, to include police and fire calls, even though the EIDS tool was not available in the police or fire protocol software.

Also, a public service announcement was released encouraging the public to inform dispatchers if flu-like symptoms will be present among anyone where police, fire, or EMS might be responding.

On April 1, the center’s software was updated again to include the IAED emergency software update that included the EIDS tool for fire and police calls.