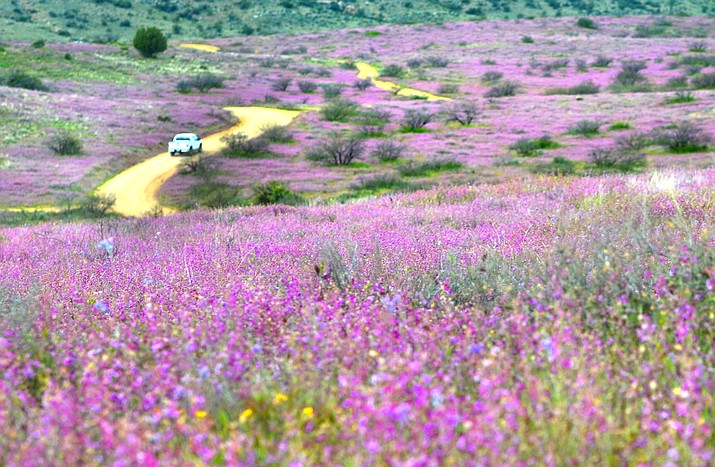 Yavapai County Public Health Coordinator Terri Farneti is fine with people taking vehicles for a ride, long as “you’re not packing 10 people in your car.”  She said if she had a motorcycle she would be riding.

Grabbing a take-out lunch, supporting local businesses, and going out for a drive in the country with somebody you are already quarantined with is “in my mind a great way to spend an afternoon,” said Yavapai County Supervisor Randy Garrison.

But be careful where you go from there, he warned. The supervisor said he saw pictures of groups of people going for a drive and then stopping and taking selfies together.

A few people are stopping, but there’s not much open in the tourist community right now. People will walk through town, go to the park or get something from one of the two restaurants that are open in Jerome, he said.

It seems like “recreational vehicular traffic,” Muma said.  “A lot of motorcycles, especially for this time of year.”

Muma said a lot of people are doing a three-hour loop from Phoenix as a way to get a break and get out of the house.

A lot of the vehicles are family units, two, six or eight. “Mom, pop and bunch of kids,” Muma said. “It’s good for the head to get out of the house.”

“It’s a fairly safe way to kill some time,” Garrison said. If a person is stuck at home with someone else, they can get in a car, and they are still in a confined space. They have to be careful how they expose themselves to others, Garrison continued. “Then there’s not much harm it,” he said.  “It’s probably pretty good mentally.”

Muma said: “It’s killing my town,” referring to the economic loss of closing stores and the lack of tourists. He said towns like Cottonwood still have stores open to support the town. In Jerome, “everything we have is shut down” except for two little restaurants.

However, the people who have stopped in Jerome have maintained social distancing, they are not touching anything, Muma said. Nothing is hardly open, and families just stay together. “They’ve been polite up here,” the chief said.