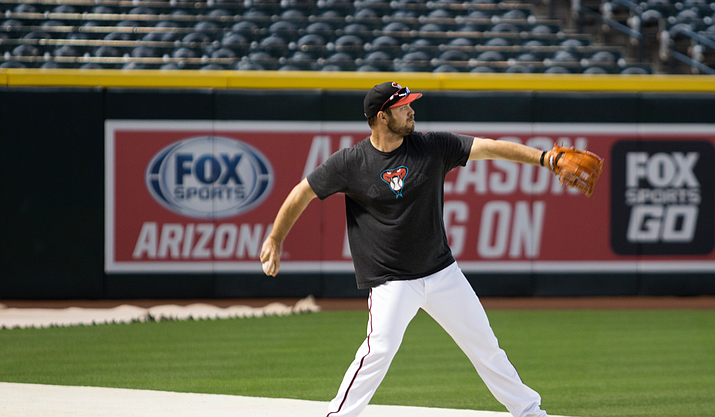 This is what Chase Field could look like, baseball without fans in the stands, if MLB plays its game here this summer. (Photo by Eddie Poe/Cronkite News

PHOENIX – Imagine an empty Chase Field as a ballgame between the Arizona Diamondbacks and the Los Angeles Dodgers is played. All 48,519 seats are vacant, save for a few cardboard cutouts, and every sound carries through the entire stadium: the crack of the bat, the pop of a catcher’s mitt, communication between teammates.

It could happen now that Gov. Doug Ducey has said he is open to Major League Baseball playing its games in Arizona. And precedent has been set.

The Chinese Professional Baseball League in Taiwan became the first professional baseball league in the world to see regular season action in 2020 on April 11, and they did it with zero fans in attendance.

“To be honest with you, the current atmosphere is really different since the fan interaction is a huge part of Taiwanese baseball,” Richard Wang, a Taiwan-based correspondent with the World Baseball Softball Confederation, told Cronkite News. “With fans on the stand, the singing and instrument-playing never stops, and it feels like you are in a rock concert from the first at-bat to the final at-bat with no intermission.

“A player described the empty stadium game as ‘a TV with a broken sound system.’”

The teams do their best to fill the cavernous space with noise besides that coming from the game being played, allowing team cheerleaders and mannequins to fill space in the stands.

“The club managed to place about 500 cardboard fans and robot drummers with LED displays showing cheering messages during the game,” Wang said. “Fans can pay the club for their photos to be placed on the cardboard. It costs NTD 5,500 ($185) for a cardboard cutout of four people ‘sitting together’ in the stands.”

The games are being broadcast in English on the Eleven Sports network for the first time, and are being carried internationally for just the second time ever.

Professional baseball being back in Asia provides a light at the end of the COVID-19 tunnel that the sports world has been stuck in since mid-March, and a potential blueprint that other leagues may follow to get sports up and running while the COVID-19 pandemic continues.

Major League Baseball floated a plan earlier in April to bring all 30 teams to Arizona and get the season underway as soon as possible. The teams would play games scattered across the 10 spring training facilities in the Valley, plus Chase Field and possible college fields. The games would be played without fans, and all players and team personnel would be isolated from the rest of the population

“We love having all of those clubs here. I think it’s many Arizonans’ favorite times of the year,” Ducey said at a news conference Tuesday.

“We have the facilities that are here. We have the hotel space that is here. We want to make certain the metrics and the data are proper before we are able to go forward but I think two words that would allow the country and the state of Arizona to know that things were headed back to normal would be, ‘Play Ball.’

“I have had discussions with the commissioner of Major League Baseball, and while I want to hold the content of those discussions in confidence, I just want everyone to know Arizona, at the right time, is very open-minded to hosting whatever Major League Baseball would like from the state at the time it would be appropriate for public health, if Arizona were in a position to reopen.”

There are still many logistical hoops for MLB and Arizona to jump through before the plan can be seriously considered. Cooperation with hotels and transportation methods, widespread and efficient testing methods for players and staff, and a willingness from all parties involved to separate from their families for months.

Another option proposed would be to split the teams between Florida and Arizona, much like spring training, USA TODAY Sports reported. The plan would return teams to their spring training facilities and play out the season there.

The teams would play based on location, rather than be divided based on American or National leagues, but that plan comes with many more obstacles. While the spring training facilities in Arizona all rest within the Phoenix metro area, the facilities in Florida are spread out across the state, making transportation tougher.

Florida could position itself to host more than just baseball, after a memo released recently designating professional wrestling (WWE) as an “essential business,” and applying that notion to all sports, given there are no fans in attendance and reaches a national audience.

In which direction COVID-19 is trending will impact any decision MLB makes. Taiwan has reported 395 confirmed cases and six deaths with its numbers on the decline. Arizona has reported almost 5,000 cases as of Sunday, Florida had almost 25,000.

Not all players are on board with returning to the game as fast as possible. Los Angeles Angels star Mike Trout spoke to NBC Wednesday on the possible “red flags” of the situation.

“I obviously want to play as fast as we can,” Trout said. “Get to a city, maybe Arizona… but being quarantined in a city for a couple of months, (that) would be difficult for some guys. What are you going to do with family members?

“My wife is pregnant. What am I going to do when she goes into labor. Am I going to have to quarantine for two weeks after I come back? Obviously I can’t miss the birth of our first child. There are a lot of red flags. There are a lot of questions. Obviously we would have to agree on it as players. I think the mentality is that we want to get back as soon as we can. But it has to be realistic. It can’t be sitting in our hotel rooms, and just going from the field to the hotel room and not being able to do anything. I think that’s pretty crazy.”

Dr. Anthony Fauci, one of the faces of the U.S. government’s response to the COVID-19 pandemic, thinks it could work.

“There’s a way of doing that,” Fauci said on “Good Luck America,” an in-house interview series from Snapchat. “Nobody comes to the stadium. Put (the players) in big hotels, wherever you want to play, keep them very well surveilled. Have them tested every single week and make sure they don’t wind up infecting each other or their family, and just let them play the season out.”

Even with no fans in the stands?

“People say, ‘Well, you cannot play without spectators.’ Well, I think you can get enough buy-in from people dying to see a baseball game (to make it happen),” Fauci said.

Wang agrees, noting how the baseball being played has brought a welcome distraction to Taiwan.

“I believe that one of the key mindsets to open the season is to provide the public a sense of normality,” Wang said. “The outbreak of the pandemic did cause some disturbance, uncertainty, and small scale of chaos in our lives during the past months.

“Professional sports generally have their place in people’s minds as a way to relax, entertain, or even vent. I think it is important to show the public that this part (sports) of the world is still running and public can turn to it to calm their minds, and to have a break from their COVID-19-occupied lives.”