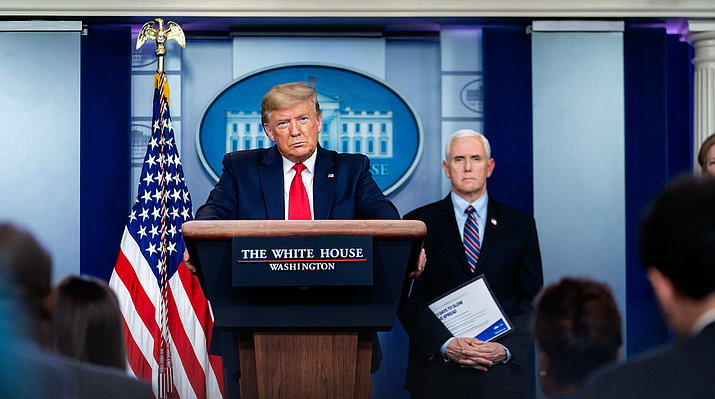 President Donald Trump, shown here in a file photo from March, named a 97-member congressional task force Thursday to look into ways to reopen the economy in the face of the coronavirus. (Photo by Tia Dufour/The White House)

PHOENIX – Both Arizona senators and a House member were named Thursday to President Donald Trump’s “Opening Up America Again” task force, which is charged with looking at ways to start easing business and social restrictions imposed because of the coronavirus.

But Arizona Democratic Sen. Kyrsten Sinema, Republican Sen. Martha McSally and Rep. Andy Biggs, R-Gilbert, all said they were honored to be on the task force and eager to get to work.

Even though she will be one of only 23 Democrats or independents on the 97-member task force, Sinema said she is optimistic about the group’s membership.

“I will work with anyone to support Arizona’s state and local leaders, ensure our communities adhere to scientific best practices to address our current health emergency and provide employers the resources to recover and get Americans back to work once the immediate crisis has passed,” Sinema said in a statement released by her office Thursday.

Trump officially announced the congressional group during the daily briefing by his coronavirus task force, pointing to the urgent need to reopen the economy, which has been slammed by business closings, unemployment and cratering sales as a result of COVID-19 restrictions.

The announcement came the same day that Trump presented his own plan for reopening the economy to the nation’s governors in a conference call. An outline of that plan released by the White House Thursday evening said they would be driven by medical data, would happen a step at a time as opposed to all at once, and would largely empower governors to make decisions for their states, on a county-by-county basis if needed.

“Our approach outlines three phases in restoring our economic livelihood,” Trump said. “We are not opening all at once, but one careful step at a time.”

“Every state is very different … If they need to remain closed, we will allow them to do that. And if they believe it is time to reopen, we will provide them the freedom and guidance to accomplish that task,” he said.

It was just this week that Trump had insisted he has the authority as president to order states to act, a stance that drew sharp pushback from governors. And he has also been highly critical of Congress this week, but after a call with lawmakers on the task force he said he was “pleased to hear such positive feedback … about the work that the administration is doing to keep America healthy and prosperous,” according to a White House press release.

Details about when the task force will meet and how it might operate were unclear Thursday, and the White House did not immediately respond to request for comment.

But McSally said she has been in close contact with the president and his administration and hopes her conversations with small Arizona businesses help shape the task force’s direction.

“I have been in constant communication with Arizona small business owners, industry leaders and elected officials to understand the challenges they are facing,” McSally said in a statement from her office. “I will take Arizonians’ concerns and ideas straight to the task force of decisionmakers to inform a strong economic recovery.”

“We have to face this coronavirus outbreak in a more rational way.I trust the American people,” Biggs said in a tweet. “We will respect guidelines to not spread a public health contagion.”