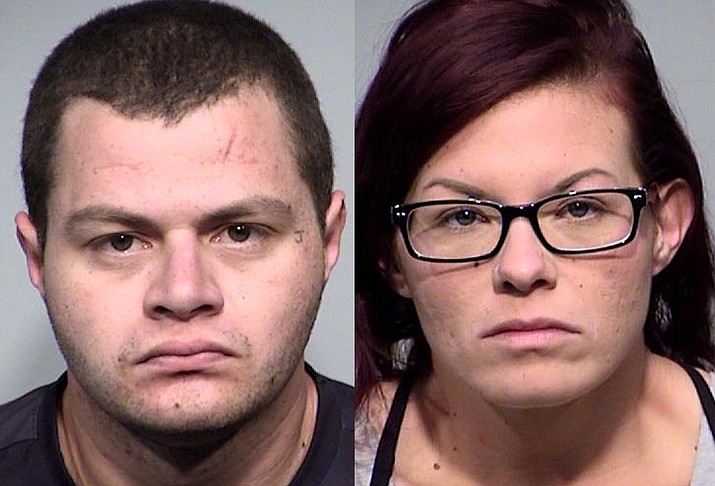 COTTONWOOD - A Phoenix man and woman were arrested early Friday morning on multiple charges after a Cottonwood police sergeant spotted them in a truck that had been reported stolen.

During the early morning overnight hours Friday, while on routine patrol, Sgt. Chris Dowell recognized a black Dodge truck backed into a parking space at a local motel in Cottonwood. He recognized it as matching a vehicle captured in surveillance footage where suspects used a stolen credit card to make purchases.

Dowell contacted a woman sitting in the passenger seat of the truck. She was identified as 29-year-old Mary Amanda Garner of Phoenix.

Right after contact was made with her, a man exited a motel room and approached them. He was identified as her boyfriend, 28-year-old James Thomas McCord, also from Phoenix.

The truck she was in was reported stolen out of Tempe. In addition, McCord had numerous credit cards belonging to other people in his wallet — cards that were allegedly determined to be stolen.

A search warrant was written and served on the stolen truck and the motel room McCord and Garner had rented.

Numerous items of evidentiary value were located that indicated they have been involved in vehicle burglaries and mail thefts. A large amount of mail from the Phoenix area was located in their possession, along with mail from Sedona and the Verde Valley.

Evidence linking them to the recent rash of vehicle burglaries in Cottonwood was also located.

The investigation is ongoing and detectives will be contacting additional victims and reaching out to the U.S. Postal Inspector about the alleged mail thefts.