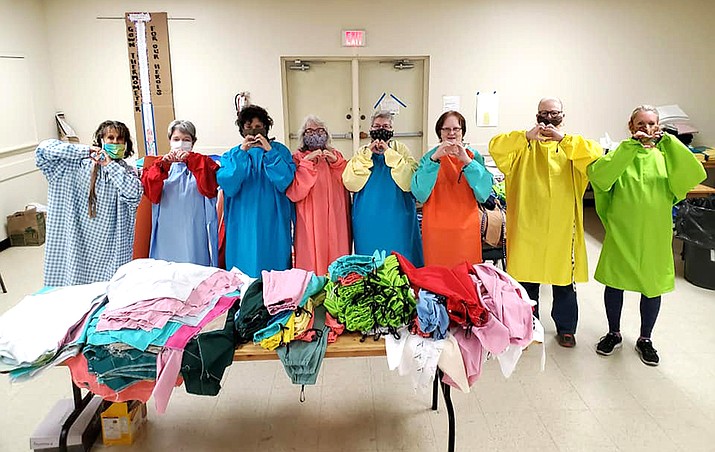 The seamstresses from the Verde Sews group test out gowns that are being sewn for the Verde Valley Medical Center in Cottonwood. Photo courtesy of Coleen Forbes Gilboy

COTTONWOOD - A group of doctors, nurses and staff gathered in the hallway of Verde Valley Medical Center and formed hearts with their fingers for a video salute to the local women and men sewing them hospital gowns.

“Thank you from our hearts,” the hospital staff rung out in unison as some also put their hands to their hearts wearing the colorful, multicolored gowns.

The video is a glimpse of ground zero of the coronavirus threat in the Verde Valley. The video was posted on the Verde Sews Facebook page to thank them for the gowns they have been sewing for the VVMC staff.

The hospital put out a call for 2,000 gowns and masks because of the coronovirus emergency and after three weeks Verde Sews seamstresses have made over 500 hospital gowns, explained Coleen Forbes Gilboy.

VVMC reported it has received more than 800 gowns from the community, which includes gowns from other local groups like SedonaKind in Sedona and also from various individuals.

It takes an organized, factory-like process to make the gowns that meet hospital standards, Gilboy said.

Between their small local base, where they have about nine people sewing at a time, and all the people sewing in their houses and other volunteer bases, Gilboy said they are pushing about 300 volunteers.

As an example, some people just only do the ties. Each gown as four ties, she said

“We have 'ripologists' we call them,” she said. That’s the person who takes 10-yard bolts of material and rips them apart for manageable pieces for gowns or sleeves.

And those are sent to the “cutters,” who cut out sleeves. Then it goes to the “sleeve factory,” which is very time-consuming because you have to put the elastic in and seam them, she said.

Then it goes to the lady who inserts all the sleeves, Gilboy said. And then they put on the neck piece, and sew it on twice because it holds up the gown. The last step is to put each gown through quality-control. There are 12 pieces to each gown and about six people work on each one, she said.

Out there, on any given day, there are 50 people in the Verde Valley working on the gowns, she said.

Many volunteers are retired. One person works at the jail at night, there’s an author, another woman who lost her job and a stay-at-home mom.

“Our group works seven hours a day, six days a week,” she said, and every person is a volunteer."

Originally the hospital purchased some of the fabric, but the group went through that pretty fast so the volunteers just found their own fabric, thus explaining the wide-ranging array of colors of ¬gowns turned into the VVMC.

If people want to sew or make a donation, they can find the group on their Facebook page, Verde Sews, and contact them there.

The goal is 2,000 gowns, she said. It took three weeks to get to 1,000 and they plan on continuing to sew until they are told to stop.

The sewing group members have seen the videos and photos of the doctors, nurses and staff on social media posing in their new Verde Sews gowns.

“That has been the thing that has motivated us the most to keep going,” Gilboy said.