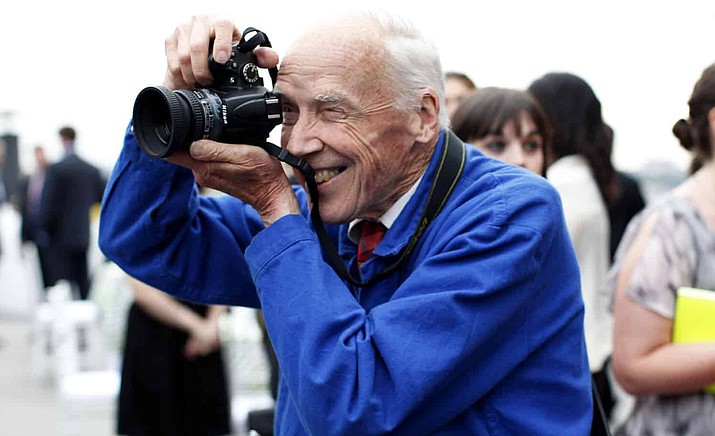 Variety calls The Times Of Bill Cunningham “a snapshot of a life that leaves you grateful for having encountered it.”

“We are excited to collaborate with some terrific distributors to bring a bit of the Mary D. Fisher Theatre experience to your home,” said festival director Patrick Schweiss. “We are partnering with them to bring you several new indie films still in their theatrical release window and now available for you to stream at home from the best seat in your house!”

Here is a list of the current MDF@Home offerings. Visit www.SedonaFilmFestival.org for details and information on how to order the film screenings.

The Times Of Bill Cunningham

Told in Bill Cunningham’s own words from a recently unearthed six-hour 1994 interview, the iconic street photographer and fashion historian chronicles, in his customarily cheerful and plainspoken manner, moonlighting as a milliner in France during the Korean War, his unique relationship with First Lady Jackie Kennedy, his four decades at The New York Times and his democratic view of fashion and society.

“Corpus Christi” is a 2020 Academy Award-nominee for Best International Film.

After spending years in a Warsaw prison for a violent crime, 20-year-old Daniel is released and sent to a remote village to work as a manual laborer.

The job is designed to keep the ex-con busy, but Daniel has a higher calling. Over the course of his incarceration he has found Christ, and aspires to join the clergy - but his criminal record means no seminary will accept him.

When Daniel arrives in town, one quick lie allows him to be mistaken for the town’s new priest, and he sets about leading his newfound flock.

Though he has no training, his passion and charisma inspire the community. At the same time, his unconventional sermons and unpriestly behavior raise suspicions among some of the townsfolk - even more so as he edges towards a dark secret that the community hasn’t revealed in the confessional booth.

Anchored by a “dynamically physical, wild-eyed performance” (The Hollywood Reporter) from newcomer Bartosz Bielenia, “Corpus Christi” is an incisive, darkly humorous, and “engrossing exploration of faith, second chances and the possibility of atonement.”

Directed with the full force of an investigation by Barak Goodman and Chris Durrance, “Slay the Dragon” shows how gerrymandering has become an immensely powerful weapon of partisan advantage, creating an unresponsive and unaccountable government.

But ahead of the 2020 elections and a new round of redistricting, voters are fighting back. With exclusive access to influential, citizen-led activist groups, as well as the legal team that brought the most important voting rights case in a generation to the Supreme Court, “Slay the Dragon” chronicles the civic grit that is turning the tide in the battle for the legitimacy of U.S. democracy. You can watch the trailer here.

Antiquarian booksellers are part scholar, part detective and part businessperson, and their personalities and knowledge are as broad as the material they handle. They also play an underappreciated yet essential role in preserving history. “The Booksellers” takes viewers inside their small but fascinating world.

D.W. Young’s elegant and absorbing documentary is a lively tour of New York’s book world, populated by an assortment of obsessives, intellects, eccentrics and dreamers, past and present: from the Park Avenue Armory’s annual Antiquarian Book Fair, where original editions can fetch hundreds of thousands of dollars; to the Strand and Argosy bookstores, still standing against all odds; to the beautifully crammed apartments of collectors and buyers.

The film, executive produced by Parker Posey, features a range of commentators, including Fran Lebowitz, Susan Orlean, Gay Talese, and a community of dedicated book dealers and collectors who strongly believe in the wonder of the object and what it holds within.

In post-WWII Leningrad, two women, Iya and Masha (astonishing newcomers Viktoria Miroshnichenko and Vasilisa Perelygina), intensely bonded after fighting side by side as anti-aircraft gunners, attempt to readjust to a haunted world. As the film begins, Iya, long and slender and towering over everyone-hence the film’s title-works as a nurse in a shell-shocked hospital, presiding over traumatized soldiers.

“Incitement” is a gripping and unnerving look through the eyes of a murderer who silenced a powerful voice for peace.

Log on to www.SedonaFilmFestival.org and click on the MDF@Home link under the Events tab on the home page (or directly visit www./SedonaFilmFestival.com/mdfhome/) for links to order virtual screenings of any of these films. For each title, a portion of all sales will benefit the Mary D. Fisher Theatre and Sedona International Film Festival.

The Sedona Film Festival will keep you up-to-date on more great events to enjoy from your living room as we all shelter in place for the coming weeks. Stay tuned for more updates and visit the festival’s website at www.SedonaFilmFestival.org for details and information.