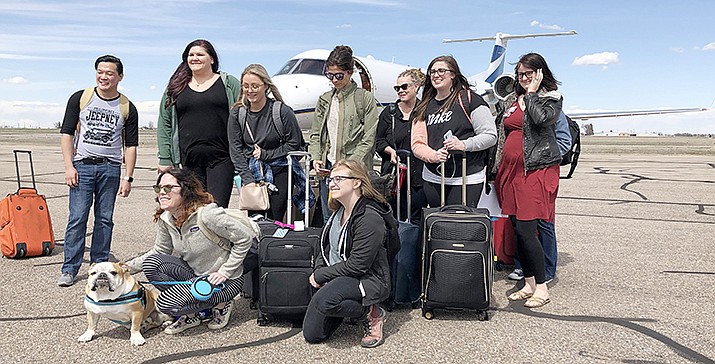 Nurses from Banner Health’s hospitals in metro Phoenix arrive in northern Colorado to help with the COVID-19 pandemic. (Photo courtesy of Banner Health)

PHOENIX – Bailey Scalise said she hasn’t seen her family in about a month.

She was among 10 nurses from three Banner Health hospitals in metro Phoenix who flew by private jet – courtesy of a donation made by Jerry Moyes of Swift Transportation – to Greeley on March 29.

Greeley, about 50 miles northeast of Denver, is the biggest city in Weld County, which has experienced some of the highest numbers of COVID-19 cases in Colorado, according to the Greeley Tribune. One public health official attributed the high numbers to “outbreaks at nursing homes, a concentration of essential industries in the county and less cooperation with physical distancing measures,” according to the article.

Scalise, who works at Banner-University Medical Center Phoenix, said patients in Colorado differ in some ways from those in Arizona, who tend to be older.

“My patients here are really young,” Scalise said from Colorado. “Like my first day, I had three patients that were all in their 20s, and they looked OK … but they were requiring incredible amounts of oxygen. I had somebody that was pretty much maxed out on the amount of oxygen you can give somebody without being on a ventilator.”

COVID-19 is unlike anything she’s seen before.

“It’s hard seeing some of these patients that are really, really, really sick, and they’re making some tough decisions about their care, and the family can’t be there with them,” Scalise said. “That’s really hard.”

Greeley residents have welcomed the nurses, she said.

“First of all, we were greeted at the airport with a bulldog and a bunch of cowbells,” she said. “A couple times a week, we’ll come home from a shift, and there was one day where this local bakery left these custom-made cupcakes with little like EKG hearts and thank you notes at our doors. So we definitely feel very supported by everybody here.”

Scalise, who plans to return to Arizona with most of the other nurses on April 25, said she is confident the work they do is making a difference.

A whiteboard at the employee entrance to the hospital tracks the number of patients who have been taken off ventilators and how many patients have been discharged. The numbers are going up, and that’s a sign of hope.

“It’s like the sweetest thing,” Scalise said. “I love it.”