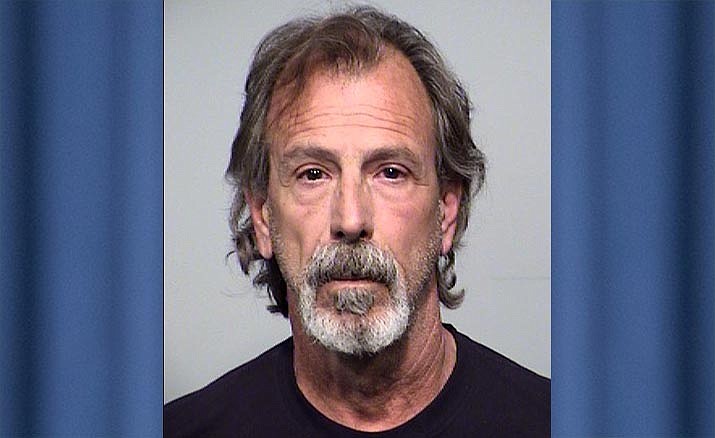 Palumbo, said D’Evelyn, was booked into the Camp Verde Detention Center and subsequently released on a $10,000 bond.

According to a news release from D’Evelyn, “Based on information received from the Internet Crimes Against Children (ICAC) task force and the Camp Verde Marshall’s Office in March of this year, YCSO detectives began attempting to identify a person downloading/sharing pornographic images of children. The images involved children, some under the estimated age of 10, engaged in sexual activity.”

D’Evelyn said a forensic search provided officers with a lead to an address on Reeves Arena Road in Camp Verde. Verification through public records resulted in Palumbo’s name as a resident. A search warrant was sought and granted, and Palumbo was contacted at his home on April 14.

“A damaged laptop was found in the house, which Palumbo eventually admitted breaking knowing the child pornography images stored on the computer would land him in jail,” D’Evelyn said in the news release.

Detectives were able to extract six images off the laptop all involving minors engaged in sexual activity/positions.

According to justice.gov/criminal-ceos/child-pornography, “The production of child pornography creates a permanent record of a child’s sexual abuse. When these images are placed on the Internet and disseminated online, the victimization of the children continues in perpetuity. Experts and victims agree that victims depicted in child pornography often suffer a lifetime of re-victimization by knowing the images of their sexual abuse are on the Internet forever. The children exploited in these images must live with the permanency, longevity, and circulation of such a record of their sexual victimiza¬tion. This often creates lasting psychological damage to the child, including disruptions in sexual development, self-image, and developing trusting relationships with others in the future.

“Furthermore, victims of child pornography suffer not just from the sexual abuse inflicted upon them to produce child pornography, but also from knowing that their images can be traded and viewed by others worldwide. Once an image is on the Internet, it is irretrievable and can continue to circulate forever. The permanent record of a child´s sexual abuse can alter his or her life forever. Many victims of child pornography suffer from feelings of helplessness, fear, humiliation, and lack of control given that their images are available for others to view in perpetuity.”