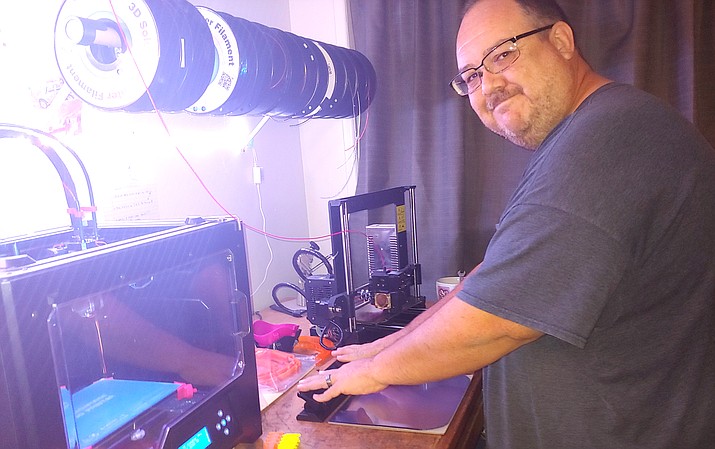 Jesse Dowling smiles as he works on a face-shield material at his Cottonwood home. Dowling has been using extra plastic material to make face shields needed during the COVID-19 virus pandemic. Courtesy photo

COTTONWOOD -- Many people who aren’t working during the COVID-19 virus pandemic are tackling a few projects around the house.

Dowling uses at least one of the three 3-D printers he has in his home to mold the plastic head frame of face shields, using material he already had on hand. The shield that attaches is nothing highly medically tested; it’s merely a thin, clear plastic report cover from an office-supply store.

“I’m not set up to mass-produce anything,” Dowling said of the setup in his home. “A big facility could do thousands of these. I can maybe make two or three per hour.”

Using a process called fused deposition modeling, or FDM, Dowling creates face shields that are meant to supplement other protective gear, such as respirator masks, for healthcare workers, though some people have worn the shields in public without masks underneath.

Serving as a sort of “splashguard,” the shields don’t fit tightly against the face, but rather, stop droplets from getting near a worker’s face.

The thin plastic sheets are perforated to make breathing easier, and are meant to be one-time use, whereas the frame is washable and reusable.

“It’s not primo-grade medical equipment,” Dowling said. “But it will help.”

He works for Pender Engineering in Cottonwood, but has been home since about mid-March. As of Tuesday, he said, he’s made 60 masks over the past month, with 10 sold at-cost and 50 donated.

He has donated equipment to either medical clinics or nonprofit organizations.

Dowling is not advertising the masks as for sale; he has posted photos of some of his donation-ready batches of completed frames and cover sheets on his social media, and those number in the dozens. Some of his shields have gone to the Verde Valley Homeless Coalition.

Dowling has a relative that works at Verde Valley Medical Center; a few shields have been dropped off there to be evaluated by management.

Dowling has networked with many local government staff, such as City of Cottonwood leaders and Brandi Bateman, administrative assistant for District 3 Supervisor Randy Garrison, to find out who needs or wants the face shields.

Dowling also has made holders for the traditional masks, allowing users to loop the mask straps in behind their heads into the clasp, rather than around their ears. Dowling is limited by his supply of material on hand; he doesn’t have the resources to locate and order more.

“The bright orange material used for the face shield frames is left over from a Halloween project,” he said. “I’m keeping a close eye on how much is left.”

Dowling said he is simply making as many of the frames as he can.

“Under-promise and over-deliver has been the philosophy,” he says of his volunteer effort. 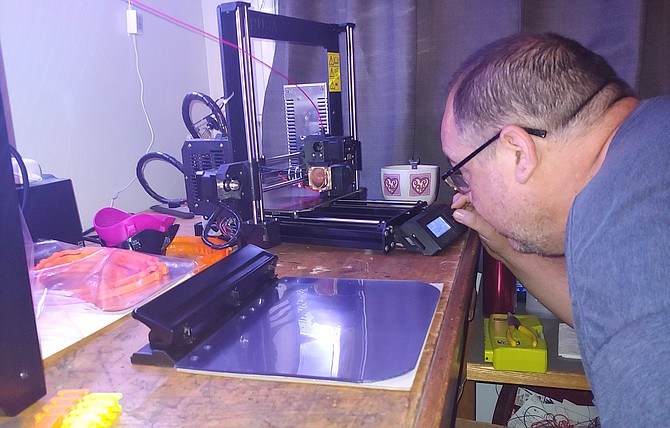