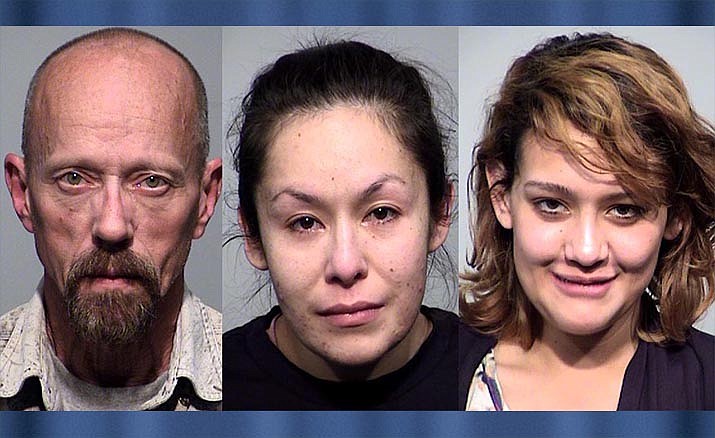 COTTONWOOD - Two women and one man — all Cottonwood residents — were taken into custody from a recent traffic stop and booked on felony charges after police say a large amount of drugs were discovered in the vehicle — including 38 fentanyl pills and oxycodone pills.

According to a news release from the Yavapai County Sheriff’s Office, Steven Lee Carns, 51; Rose Rodriguez, 30, and Mayvi Garcia, 24, all face charges that include at least one count of possession of a narcotic drug for sale.

April 15, just before midnight, according to the release, a YCSO deputy pulled over a 2002 white Cadillac DeVille for a moving violation on State Route 260 in Camp Verde.

Detectives from the Partner’s Against Narcotics Trafficking task force, who were investigating Carns, assisted in the arrests.

An officer from the Cottonwood Police Department deployed his K9 partner and received an alert to a narcotics odor from the vehicle. A subsequent search of the vehicle was conducted to locate the source of the odor.

Additionally, almost three grams of marijuana was seized along with a smoke tube containing fentanyl residue.

The release says Garcia and Rodriguez “essentially denied” knowledge of or involvement with drug sales, with Carns declining to answer any questions.

Detectives found several $20 bills in Carns’ shirt pocket, which is a common denomination of currency utilized in drug sales, according to YCSO.

Garcia’s cell phone had evidence of drug sales by way of text messages, the release states.