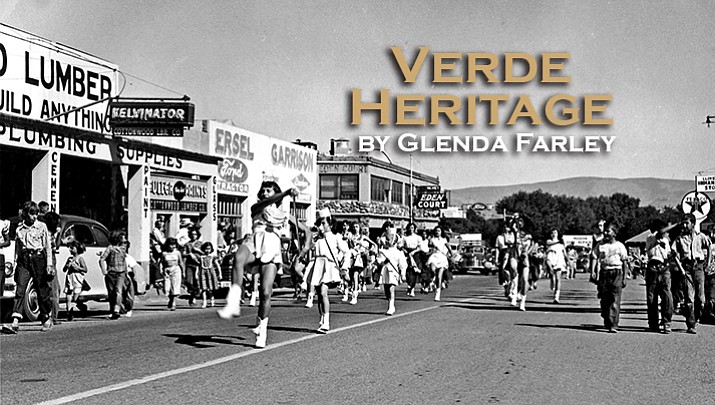 "Through the kindness and courtesy of the United Verde Extension Mining Company at Clemenceau, more or less hard work on the part of Joe Bechetti, and the able direction of Professor Navarro, the bandmaster, a 40-piece band has been organized, with principally raw material to start with. This band is called the United Verde Extension Band and it has divided concerts with Cottonwood.

In view of the friendship existing between Cottonwood and its sister town of Clemenceau and the efforts of public spirited citizens of Cottonwood, the United Verde Extension Mining Company has decided to build an up-to-date bandstand, equal to any in Arizona, on the west side of the ball park, and on the east side of Main Street.

This bandstand will be 24 feet square, hexagonal in shape, and will afford room for the big U.V.X. Band to give Saturday night concerts throughout good weather.

The band will also be available for any celebrations the town may engage in and is a valuable asset to the Verde district, as there now is but the one band. More publicity will be given the band and the accommodations being arranged for it as the scheme progresses. Forty fine uniforms have been ordered and will soon be here." (Verde Copper News; Jerome; Tuesday, April 20, 1926; page 8.)

ANNIVERSARY OF THE BAND: April 23 "is the anniversary of the organization of the United Verde Extension Mining Company band of 48 pieces. In commemoration of their organization [in 1925] they played a concert in Clemenceau and another in Cottonwood, after which the band boys all enjoyed a free theater entertainment at the expense of Joe Bechetti, owner of the Rialto Theater. Mr. Bechetti has taken a great interest in the band and when they parade will probably lead the procession, with the drum major's honors. The new uniforms have not arrived yet, but when their flashy outfit is donned and they play 40 strong, that will make the district sit up and take notice." (Verde Copper News; Tuesday, April 27, 1926; page 5.)

BAND CONCERT: "The band concert held by the U. V. X. Band was given in Cottonwood in front of the New Rialto Theater [now, The Tavern] on Sunday night at 6 p.m. These concerts will be a feature every week during the summer season. This is the only band in the Verde district, and it is there with the goods. The bandmaster, Senor Navarro, deserves much credit, and its guardian scout, Joe Bechetti, leaves no stone unturned to help them out. The U. V. X. has already poured the cement piers for the bandstand to be erected in Cottonwood's ball park, just south of the grandstand." (Verde Copper News; Tuesday, May 4, 1926; page 2.)

"BAND CONCERT" Saturday night the United Verde Extension Band played a concert in the new bandstand recently erected in the Cottonwood-Clemenceau ball park. Scores of autos were parked in every direction and all were filled with eager listeners to the choice selections rendered. The uniforms have been delayed, but are expected most any day now. The boys will present a pretty nifty appearance with their new regalia." (Verde Copper News; Tuesday, June 8, 1926; page 5.)

On Main Street, south of Smelter Avenue (now, Pima) the bandstand was built between the ball park bleachers and the U. V. X. school built in 1919. There was a similar bandstand in Clemenceau.