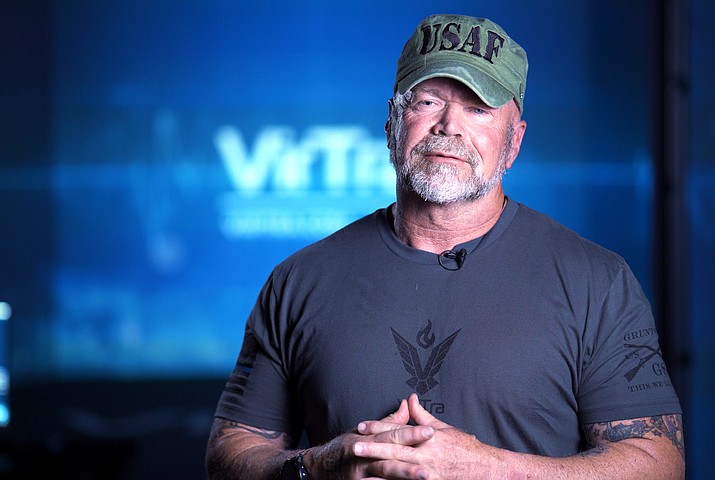 Chief Allen Muma has been a police officer and trainer for nearly 40 years, from his days as an Air Force MP to his current post serving the small town of Jerome, Arizona, where he’s been chief for more than 20 years. He also teaches at the Northern Arizona Regional Police Training Academy.

“I’ve been a trainer for a long time,” Muma said, “and I’m a Force Science Institute graduate. I’ve been to more schools than I can tell you about.”

He became familiar with VirTra’s training simulators while teaching at the Northern Arizona Regional Police Training Academy. Arizona DPS had invested in several VirTra V-300 simulators to provide training to various police departments in the state at shared locations, including the academy.

“I just fell in love with it,” said Muma. “VirTra is looking forward. It’s not just shoot/don’t shoot. Now, they’re offering scenarios and more training, so you get this auditory or visual learning from watching it, but then you get that kinesthetic learning from actually practicing what you just learned, which actually is proven to hold in your mind longer.”

ADDING TO THE OFFICER’S TOOLBOX

Because of his familiarity with police training and the VirTra system, VirTra invited Muma to preview their newest course and offer feedback. In early April – Autism Awareness Month – Muma traveled to VirTra headquarters in nearby Tempe to check out their newest course, designed to help officers recognize the behaviors common among people with autism and adjust their response for more successful interactions.

Muma was impressed, and he says it’s imperative to give officers the tools they need to prepare for these situations.

“The odds are there that you’re going to encounter people on the spectrum, and unless you’ve dealt with them before, you really don’t have anything in your toolbox to reach for,” he said, “so VirTra came out with this. They offer scenarios in the teaching module, and then it can culminate with a practical test.”

Further, he says, the course offers a way to give officers knowledge they don’t get in the academy that can prevent the kinds of misunderstandings that have resulted in use-of-force issues for police officers.

Law enforcement has come a long way in understanding mental health issues and special populations and responding to those kinds of situations, he adds, but the training hasn’t really dived into the autism spectrum and the communication challenges it can bring.

“You’ve got to understand what they’re dealing with and know the clues to make you go, “Ah, maybe this is somebody that has autism,’” said Muma. “That way you can know that, ‘Hey, I might have to give them distance or talk to them differently.’ It’s wonderful that VirTra is filling that niche.”

The new course features roughly a half-hour of instructional videos with Dr. Daniel Openden, president and CEO of the Southwest Autism Research & Resource Center, which can be followed by branching scenarios to help officers explore the new information and practice interacting with people with autism in a controlled environment.

“Even the actors they used to play the autistic individuals were actually people with autism themselves. You didn’t have an actor trying to pretend,” said Muma. “That really impressed me.”

Muma said he understood a little about people with autism, like the repetitive behaviors called “stimming” or that some people might be verbal, before taking the course. But he learned several key strategies that apply specifically to policing, such as maintaining physical distance and speaking clearly, slowly and simply. He also found out that some people with autism carry an ID card with their full name and emergency contact information that they learn to present that to somebody who asks for it.

VirTra isn’t trying to make you an expert, he says, but presents and reinforces the most relevant information in a way that’s efficient and effective for police officers. For example, people with autism often are extra-sensitive to bright lights and loud noises, so if officers know they are being dispatched to a call involving a person with autism or encounter someone who exhibits those recognizable behaviors, they can turn off lights and sirens to reduce the sensory overload.

“If you cause them this significant discomfort, then they might close up. It’s harder for you then to get through to them and figure out what’s going on,” said Muma. “Then the officer gets frustrated because they can’t get through to them, and then the officer tends to get potentially louder and more repetitive, which just feeds into a circuit and is counterproductive to what you’re trying to do.”

Ultimately, he said, this is another form of de-escalation training for a very specific circumstance.

“You don’t give up officer safety. You maintain your stand-off distances and things like that,” he said, “but you know that they may reach into their pocket for their ID to present it to you. It may be a rather quick movement. In a situation like that, if an officer is in a better position of cover or he has an advantage, then he should be able to allow a little more time. By picking up on the clues, we understand that this is a person with autism we’re dealing with and their behavior’s going to be different.”

Muma says he plans to add the course to his department’s training efforts, and he’s excited to see the results as officers across the country complete the course.

“This could be done in roll call training or small groups,” he said. “I think what it will do is give officers a tool in their toolbox that they can reach for when they encounter somebody who might have autism, that falls in that spectrum. I think it’s going to reduce conflict and help out a lot.”

About the author: Rachel Zoch is a branded content project lead for Lexipol, where she has written about public safety products and issues important to police, fire, EMS and corrections since 2015. A University of Texas journalism graduate, she previously worked the copy desk of a local daily newspaper and served as managing editor of a trade magazine for the multifamily housing industry.