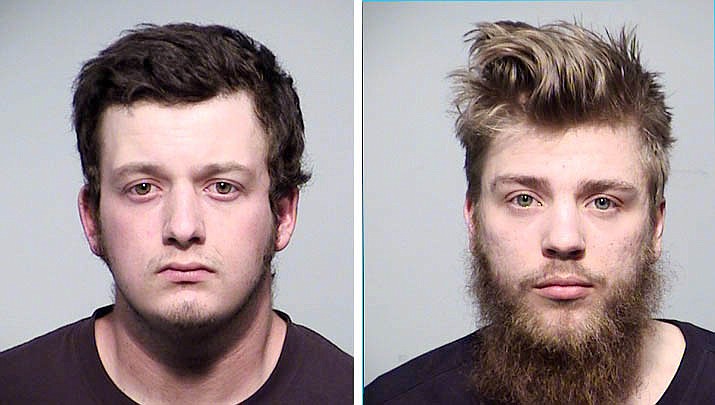 COTTONWOOD - Two men are facing multiple felony charges after a Tuesday night incident in which Yavapai County Sheriff’s Office personnel allege a dispute over truck noise escalated into the brandishing of firearms.

Michael Crane, 21, and Randee Coats-Marsh, 18, were booked for aggravated assault with a deadly weapon, disorderly conduct, reckless handling or display of a firearm, according to a news release.

Crane was also charged with criminal trespassing. A 19-year-old man was arrested on a misdemeanor charge of recklessly damaging property; all three men are from Cottonwood.

Tuesday, at about 10:15 p.m., YCSO deputies were dispatched to a home in the 1200 block of South Verde Drive in Cottonwood, near Fir Street, regarding an assault involving firearms. An initial call described multiple trucks revving their engines; an additional call followed indicating an incident in progress involving firearms.

Deputies arrived and detained at least four people, including suspects Crane and Coats-Marsh. During interviews, Coats-Marsh explained that he and some friends, who drive loud “big trucks,” were returning to the area and slowed for a dip in the road in front of a home on Verde Drive, the release states. He noted the loud truck sounds apparently annoy the resident there.

As the truck was crossing the dip, the 19-year-old suspect approached from the home and hit his truck with a bat. Coats-Marsh left and parked at a nearby residence, intending to return.

A short time later, Coats-Marsh got into the bed of a friend’s truck, joined by Crane, and returned to the Verde Drive home. A 17-year-old male was driving this truck with his 17-year-old girlfriend as a passenger.

Once at the Verde Drive home, the suspects claimed a resident — a fourth man — confronted Crane and his friends and allegedly threatened them with a bat, the release states. The man then got into an altercation with the suspects and was able to grab a shotgun that Crane was brandishing.

Crane then armed himself with a handgun while Coats-Marsh displayed a loaded AR-15 rifle.

At that point, according to deputies, Crane followed the victim — now in possession of the shotgun taken from him — into the yard on Verde Drive. Crane, still holding a handgun at the time, eventually left the yard when he heard police had been called.

A man told deputies that when the suspects returned and began arguing with his son, noticing Crane was brandishing a shotgun, confronted him, and was able to remove the gun from his grasp. The victim returned to his yard as his family was calling the Sheriff’s Office.

The release states there is no indication the victim initially approached the suspects with any weapon.

Deputies were able to view security video of the incident. That revealed that during the initial confrontation, the truck stops in front of the home, repeatedly revving its engine, and the 19-year-old man is seen running out towards the truck holding a bat-like object. A loud bang indicates he hit the truck.

Additional video evidence was reviewed, showing Crane and Coats-Marsh challenging the victim and others nearby after returning armed to confront the 19-year-old.

The 19-year-old admitted striking the truck with a bat.

Crane and Coats-Marsh acknowledged they should have sought law enforcement assistance before returning and initiating a confrontation.

Numerous firearms were seized as evidence.

Crane later admitted he had an ongoing dispute with one of the residents at the Verde Drive home that went beyond truck noise concerns.

All were booked into the Camp Verde Detention Center and later released pending county attorney review.