Thunder & Lightnin’ look at the pandemic from the inside out 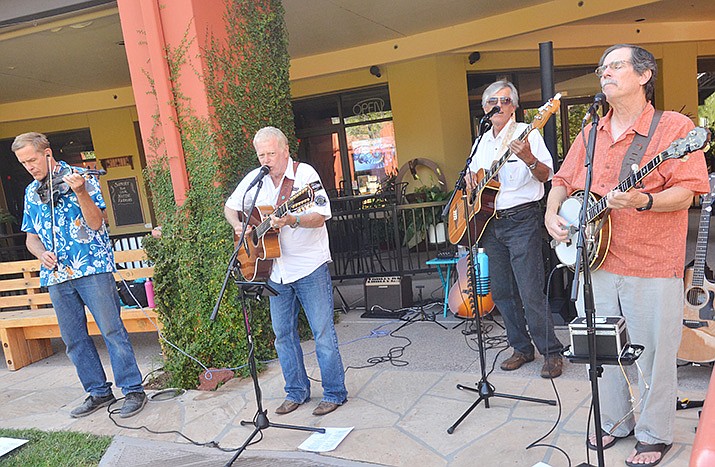 The members of Thunder & Lightnin’ were playing shows as tight as, well, as tight as thunder and lightning before the pandemic hit.

The Cornville-based Thunder & Lightnin’ were performing weekly to audiences in the Verde Valley. Then COVID shut things down.

The members of the tight-knit group have not even seen each other since.

But that does not mean they have not been playing music together and recording  thanks to modern technology.

Steve Estes, the spokesman for the band, has even written a song about the frustration with the pandemic titled: “Double Backwards Inside Out.”

Estes said he came up with the opening line for the song while he was watching the news: “Cabin Fever or another kind of fever, it’s a hell of a choice.”

“Well I thought, ‘that’s it right there’,” he said. “It’s a hell of a choice. a healthy economy or a healthy population. How do you balance that?”

Then everybody in power is making it more confusing, so thus the phrase, “Double Backwards Inside Out,” he said.

The way Thunder & Lightnin’ is rehearsing and recording right now is also double backwards and inside out from the band member’s normal routine.

Before the pandemic, they played live once or twice a week in bars, restaurants, private events and venues in the Verde Valley and Prescott. They also played seven concerts last year.

Their repeat appearance as headliners for the Coconino County Fair in Flagstaff was canceled this year, but they will play via video presentation.

Now, Estes, guitarist/primary vocalist; Tom Wehr, bass player vocalist; and Tony Cook, fiddler; individually record their music in their home studios and send music files through the internet to Rob Gibbs, the banjo player, guitarist and vocalist for the band.

Gibbs also anchors the musicality of the band’s show. Estes and Gibbs write the songs for band. About a third of their songs at shows are originals.

“Each band member operates his own recording studio with tracks from each song for each vocal and instrument passed to the band’s master studio for final mix and master,” Estes said.

”Members have decided in-person rehearsals are not yet advisable,” Estes said, adding that it’s challenging but doable.

Musicians like Estes are cooped up in their homes and have been physically separated from their live audiences for months.

Estes said he wrote his song about the pandemic early in the crisis and the band may record it when they physically reunite.

Estes says they play country, classic bluegrass, new-grass, rock and roll tunes, but they use different instrumentation that the original bands used. “We do a lot of genres of music using bluegrass, string-band ensemble instruments and approach. We use banjo and fiddle” and three-part harmony.

He said they try to take a risk and do songs that people are not familiar with like those on the album “Old and In the Way.”

He said they were playing to audiences to about 50 to a couple hundred people and were poised to play even more concert settings this year until the pandemic hit.

To keep in touch with their live audiences, Thunder and Lightning have posted a Quanrantine Concert Series that has garnered over 12,000 organic Facebook video views, he said. Some new songs have been added to the concert series, also.

Even though their return concert at the Theater on the Green in Prescott has been canceled this year due to COVID, the sound company, Prescott Pro Sounds, recorded the whole concert on studio-grade tracks. Sixteen songs are now at Mudshark Studios being mixed and mastered and the CD, “Thunder & LIghtnin’: Live at Theater on the Green,” will release in September.

Rehearsals will continue to be virtual and online using the platform JamKazam, Estes said, which allows. audio and video in real time. Zoom calls are used for strategy meetings.

This is the way the band will be releasing fresh material until they can play together again.

Estes said the band has had many discussions on when they will see each other again in person.

“As a group we have decided we need to support each other,” he said

”Until everybody’s ready to do that, we’re not going to do it.”