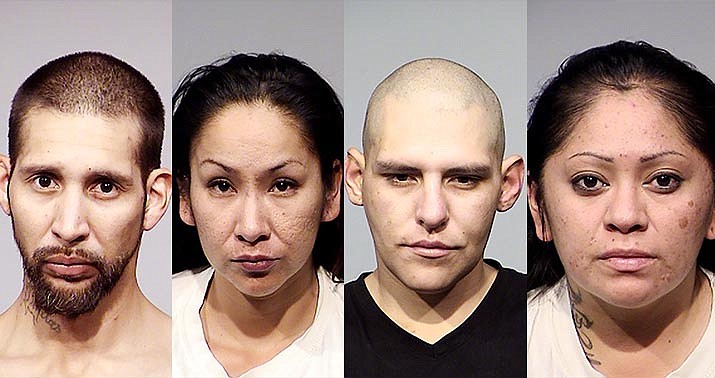 From the left are David S. Ornelas, Leslie Yaiva, Paul A. Martinez and Sherena M. Grebb, all of Flagstaff. These four people, along with a 23-year-old Flagstaff man who was cited and released on a misdemeanor charge, were booked Aug. 1 on drug charges after a traffic stop in Cottonwood. Courtesy of Cottonwood Police Department

COTTONWOOD – Five people were booked last weekend on drug charges after a traffic stop by a Cottonwood Police Department officer, according to a news release.

In the evening hours of Saturday, Aug. 1, a Cottonwood officer conducted a traffic stop on a white Chevy Impala, in the area of Airpark Road, for an expired registration tag. That officer quickly discovered, according to the release, that the driver didn’t have a license on him.

The name the driver initially provided, the report states, was discovered to be false. Officers were able to positively identify, aided by a gang-affiliated tattoo, the driver as 35-year old David S. Ornelas of Flagstaff.

The passengers were identified as Leslie Yaiva, 32; Paul A. Martinez, 35; Sherena M. Grebb, 34, and a 23-year-old man cited for a misdemeanor charge. All are Flagstaff residents.

While officers were speaking with the passengers, there was a strong odor of marijuana emitting from the vehicle, the report states. When questioned about this odor, two of the passengers handed officers a pipe with residue and a bag of marijuana.

A search, according to the report, revealed 5.6 grams of methamphetamine, 4.4 grams of marijuana, one gram of marijuana wax, one fentanyl pill and numerous items of drug paraphernalia.

All the occupants of this vehicle were arrested on multiple charges, including possession of drugs.

Martinez initially lied to officers about his name to avoid detection of multiple warrants out of the Coconino County area, police said. His charges include taking the identity of another.

Martinez, Ornelas and Grebb are still in custody at the Yavapai County Detention Center. Yaiva is out of jail on felony release conditions.

The 23-year-old man was cited and released on misdemeanor charges.