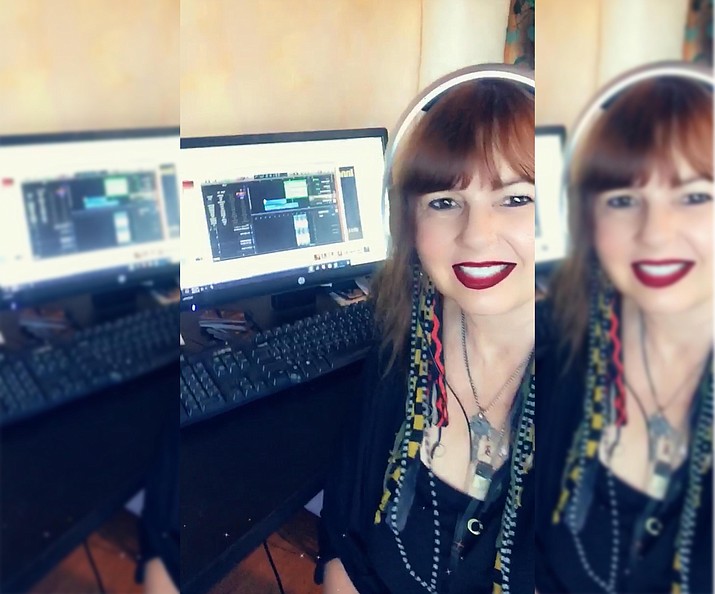 Christy Fisher is a woman who stays in orbit ... whether playing weekly solo performances at wineries and music venues or fronting her band Cattywampus.

In March, everything changed.

“Covid sounded the alarm and the plugs were pulled. Venues were closing, then reopening, then closing again. Booking was chaos with cancellations and dates always uncertain up until the last minute. It still is,” Fisher said.

“The first week was like a being locked in during a snowstorm. I live in Jerome and that kind of lockdown happens about once a year when a snowstorm comes in. It usually lasts just a couple of days,but this was going to be a long one. So I went and bought three weeks worth of groceries. I hunkered in.”

With no deadlines and no gigs on the horizon, Fisher turned to cleaning ... everything.

“I was going through old paperwork, and finding treasures,” said Fisher, “notebooks full of lyrics I’d written 20 years ago, a boxful of cassette recordings I had made when I lived in Los Angeles and I thought ‘if not now ... when?”

Fisher began with a month’s worth of online mini concerts.

“Singing into a phone was weird, but the skills came in handy. I was raising money for the Arizona Apparel Foundation a fashion organization I work with who was using their facilities to manufacture PPE for health care workers,” said Fisher. “During this everyday online ‘Isolation Tour,’ I began making background tracks for each concert, spending eight hours before each show learning new material and recording bass, percussion, keyboards, and background vocals. After a month, there were over 100 songs with tracks added to my setlist.”

Suddenly, instead of feeling like she was in jail, Fisher described her exuberance as something akin to breaking through a wall.”

“When the $1,200 stimulus check hit, I did just that,” she said. “I bought some tools, tore out some walls, and started renovating a couple of rooms into a recording studio.

“I had collected some recording gear over the past few years but had not taken the time to learn how to use some of it. Now,I had all the time in the world and the space to do it in. The entire downstairs of my home is now my rehearsal space and Treehouse Studios.”

Songwriting began in Fisher’s early teens and she had played in various bands throughout much of her life. But that took a backseat to her fashion design company .

Still, she enjoyed experimenting with the recording process.

“I worked as a background vocalist in studios for a lot of other bands and have been around recording equipment for most of my life,” she explained. “In this lockdown, I was being handed the opportunity to pick up where I had left off.”

Fisher dove headfirst into learning new equipment and recording techniques, taking a few online courses , and spending almost every night at her piano and synth keyboards playing with midi, looping, and other tools of the recording trade.

Before she knew it, three albums of material came tumbling out.

“I started a series of what I call sound paintings’ ... tracks and samples and loops that I use like paint, making techno, EDM and chill grooves. I made percussion tracks using everything from ice cubes to sandpaper and I played all the instruments, running ukulele, guitar and piano through multiple effects. That series is now on Spotify, Apple, iTunes and other streaming services. They are being pressed in a CD called XOC.

The end result, said Fisher, are tunes that are great for road trips and background music.

The second album, called “Mixed Signals,” brings her singer-songwriter side into play.

“I had the bones down and had thrown a few raw tracks up on Facebook and Soundcloud to see what response was,” said Fisher. “The trial tracks were getting a lot of hits , but I didn’t want to release the raw into the ‘business’ until things were polished.”

“When a couple of venues opened up, I began gigging in safe places and at one private party, Mark came up and said, ‘Do you mind if I gave you a few pointers on some of those tracks?’”

Fisher previous had worked with Gifford and soon began to learn what a hidden gem he was musically.

“We started sending audio files back and forth to each other. He was working from his home studio. I was working in mine,” said Fisher.

“He added some guitar parts and I gave him free reign to experiment with what was already there. He has worked with some amazing musicians in the New York area, and has had them do tracks send files to him for this project. He is now officially a co-producer on this album as well as an engineer.”

Fisher also has about 15 new songs laid down on raw tracks for a follow-up album called “Beautiful View” that will be wrapped up toward the end of the year or early 2021.

“Downtime” for Fisher obviously has been a very productive time.