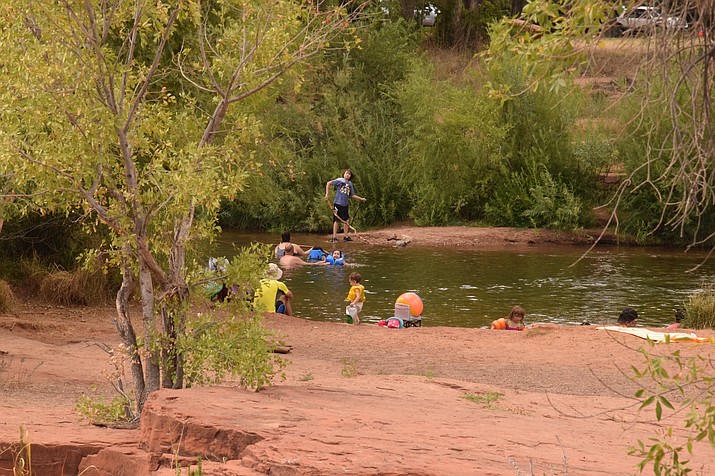 Dozens of swimmers were at Red Rock Crossing along Oak Creek on Sunday afternoon, five days after a sewage was dumped into the creek during a City of Sedona sewer construction project. VVN/Jason W. Brooks

SEDONA – New data from E.coli testing being done along Oak Creek showed a spike as tourists continue to frequent the area.

Tuesday, Aug. 4, untreated liquid sewage leaked from the State Route 179 sewer main replacement project, causing as much as 20,000 gallons of sewage to get into Oak Creek, just south of the Inn Above Oak Creek and the 179 bridge that crosses the creek.

In a Monday news release, the City of Sedona issued the latest in a series of E.coli tests revealed a numeric spike at Red Rock Crossing, a popular spot from swimmers that has large shade trees and shallow, slow-moving creek water.

A water quality sample taken from Red Rock Crossing on Sunday morning showed an E.coli level of 307.6 CFUs per 100 milliliters. That number had been 18.9 on Saturday morning’s sample, 23.1 on Friday and 8.5 and 9.8 on the two days after the spill.

The state and federal water quality E.coli limit is 235 CFU/100ml of water for recreational swimming.

“While the city sent the results to ADEQ and informed Red Rock Crossing staff, it is not clear if these elevated numbers are the result of increased recreational activity on weekends, standard variation in samples or if there is any relationship to last week’s spill,” the City of Sedona said in Monday’s release. “The city will continue testing and working with ADEQ and area stakeholders to better understand these trends.”

The Sunday test result from Red Rock Cross was the only sample to test higher than the federal limit since the spill. However, other sites along Oak Creek did see higher levels of E.coli from Saturday to Sunday; the samples taken from the Inn Above Oak Creek showed 118.7 Sunday and 64.4 Saturday, and were much lower prior to the weekend.

The city said a stakeholder group comprised of residents, city staff, and representatives from Oak Creek Watershed Council, Yavapai and Coconino county health departments and ADEQ will review all components of the incident and amend protocols that need to be updated.

Kinney Construction Services, the contractor for the construction project, is responsible for this accidental spill, the release states. The city received four reports about effluent sewage in the vicinity of Kinney Construction’s installment project began, with three of those reports coming since July 1.

“It’s very disappointing that this accident ever happened,” Clifton said. “We’re doing everything we can to avoid this type of incident in the future, including engaging stakeholders to evaluate our processes. Protecting our natural resources is of utmost importance for the city. It’s in our Community Plan. It’s in our vision statement and part of our sustainability program.”

Caroline Oppleman, communications administrator for ADEQ, said the agency uses these types of levels as a conservative, precautionary tool to inform and protect swimmers.

"ADEQ considers the entire length of Oak Creek impaired for E. coli, because its water quality does not always meet the (standard)," Oppleman said. "E. coli is naturally occurring and most strains are not harmful to people."

"At other times, however, E. coli has been measured at and higher than 300 CFUs, above the EPA BAV, in Oak Creek particularly during the summer high recreation months and following storm events," Oppleman said.

Attributing how much E. coli is related to a storm, spill, recreation, animal activity or other source is difficult, she said. A study of E. coli levels in Oak Creek conducted in 2000 found the most significant contributor to E. coli levels was raccoons -- likely drawn to the area by food and trash left behind by people recreating in the area.

ADEQ evaluates water quality impacts and data from a place of public health and safety and works with local authorities who also have responsibilities to take specific actions depending on the nature and source of the issue,, she said. While Oak Creek is designated for recreational use, E. coli from both natural and man-made sources in the area (wildlife, people recreating, failing septic systems) affects water quality in the area periodically.

"Most strains are not harmful to people," Oppleman said.

She said notifications of impacts to water quality from unpermitted discharges, like the City of Sedona sewer spill, often are a collaborative effort among the responsible party or landowner/land manager, municipality, and state and local environmental and health officials.

"It’s important for ADEQ to work collaboratively in these situations to protect public health and ensure the issues causing an unpermitted discharge are addressed and prevented in the future," Oppleman said.

Oppleman said the city's action to stop the discharge, clean and disinfect the location where it occurred, conduct water quality sampling and testing in consultation with ADEQ and notify the public, businesses and homeowners with properties on the creek in the area downstream about the spill was prompt. Also, in consultation with ADEQ, the City posted signage at the discharge area and nearby public access points, notified other community groups and issued news releases to keep the public informed.

Sunday, there did not appear to be such as sign at the main Verde Valley School Road entrance to Red Rock Crossing, or along that southeast bank of the creek.

When it comes to restricting public access, Oppleman said, generally, it is up to the landowner or land manager to grant or restrict access, in consultation with health and environmental agencies with jurisdiction.

"ADEQ is actively working with partners in the canyon area to reduce the sources of E. coli and improve water quality," Oppleman said. "Among other projects, we are currently supporting work by our partners to direct more people to areas where restroom facilities are available and clean up trash, especially after busy holiday weekends."

ADEQ also launched a Protect Our Waters campaign to educate and inform the public about sources of pollution in Arizona’s waters and the important role everyone plays in conserving the state’s waterways for enjoyment today and in the future.