Camp Verde Unified to open schools Aug. 17
Online education still an option for anyone not comfortable returning to school 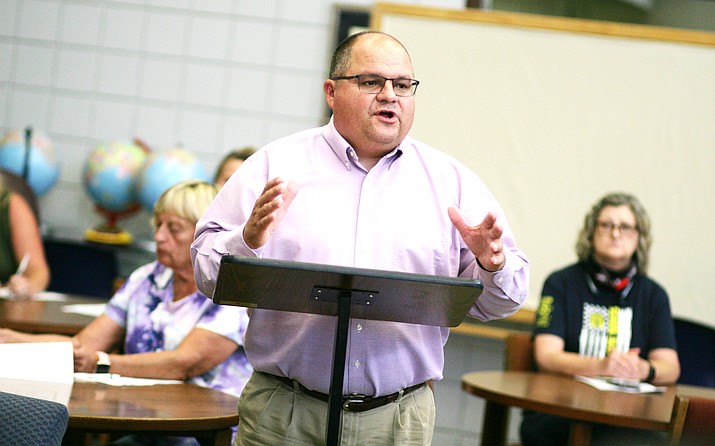 Camp Verde Superintendent Danny Howe talks to the district’s governing board before it voted 3-to-2 to open its classrooms on Aug. 17. VVN/Bill Helm 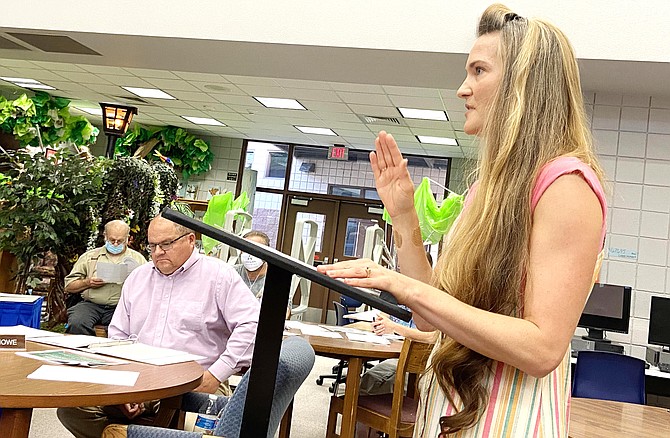 Neta Loveall tells the Camp Verde School Board that she wants to see schools open for in-person instruction as soon as possible. “I believe that a proactive approach to returning to in-person school is to allow us as parents to choose what risks we are willing to take when it comes to the overall health and well-being of our children,” Loveall said. VVN/Bill Helm

CAMP VERDE — Masks are now mandatory. That’s the only change Camp Verde Superintendent Danny Howe said he has made to the Return to Learn plan the district released in July.

Tuesday, Howe told the Camp Verde School Board that masks are to be worn by all students, staff, volunteers, vendors and visitors on district property. Students may remove their masks when they can physically distance or are outside.

Before the board’s 3-to-2 vote Tuesday to open schools Aug. 17 to in-person learning, Howe said Gov. Doug Ducey’s July 23 executive order spells out the facemask component he added to the district’s original Return to Learn plan.

Camp Verde’s Return to Learn plan, as well as online learning and distance learning expectations, are at the district’s website, campverdeschools.net.

Tuesday’s meeting was held via Zoom. Including the school board, more than two dozen people attended at the district’s library. Only a handful – four to be exact – wore masks.

Before the board voted, Howe also explained that a districtwide survey indicated that about 65% of Camp Verde Unified’s families said they would send their kids back to school as soon as its schools open.

Howe then said that about 35% of the district’s families were not ready to return their children to brick-and-mortar classrooms, regardless of when schools open.

During the board’s call to the public, several of the community’s parents said that it was time for schools to open.

“I’m not sure how much longer we can do it,” Sherry Hauser told the board. “It’s been really difficult, not fair to the kids.”

With three sons in Camp Verde schools, Neta Loveall said that schools stayed open during the Spanish Flu pandemic of 1918 and the Swine Flu outbreak of 2009.

“I believe that a proactive approach to returning to in-person school is to allow us as parents to choose what risks we are willing to take when it comes to the overall health and well-being of our children,” Loveall said. “Those of us that are ready to blaze the trail forward through these unprecedented times should be allowed to do so. We are raising the future generation of leaders and have been given an amazing opportunity to show them how to courageously overcome any obstacles or crises that they will inevitably face down the road.”

Before she voted no, Helen Freeman told her fellow board members that she thought it was premature to open schools to classroom instruction.

“I’d rather err on the side of caution,” Freeman said. “I’m not confident, I’m sorry, that we’re prepared yet.”

Eric Lawton also voted no to reopening schools for classroom instruction on Aug. 17.

Had the school board voted no to reopening school for classroom on Aug. 17, the board would have needed to approve on-site learning opportunities Ducey mandated in his executive order.

“If we need to watch them, why not teach them?” Bob Simbric asked before he voted yes to opening schools on Aug. 17.

The board also approved COVID-19 acknowledgement/disclosure and assumption of risk forms – waivers – that parents will be required to sign for their children to attend school.

The waivers do not apply to families whose students are only taking online classes through Camp Verde schools, Howe said.