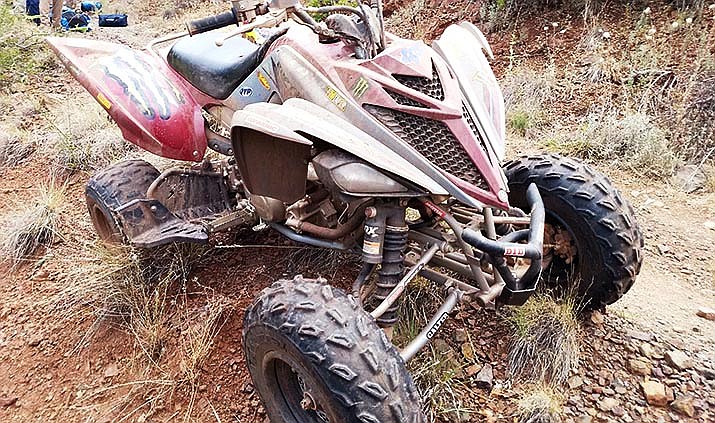 This Raptor off-road vehicle was involved in a July 26 accident in which a man and a woman were airlifted to a hospital. The Yavapai County Sheriff’s Office said this vehicle was stolen from the scene. Courtesy of YCSO

JEROME – An off-road vehicle involved in a July 26 collision on Mingus Mountain was stolen from the accident scene, according to the Yavapai County Sheriff’s Office.

YCSO said Wednesday that the man who is the owner of a 2020 Yamaha Raptor was riding in an area along Forest Road 413, near Jerome, when the wreck occurred. Both the man and the woman who was his passenger were transported by air to a hospital.

The next day, YCSO said, the owner sent a tow truck to remove the Raptor, and it could not be found. Deputies surveyed the area and were not able to find the vehicle. Follow-up by detectives have provided no leads.

The vehicle record has been entered into a national stolen vehicle system. The last six digits of the vehicle ID number of the gray and red Raptor are 109314. The Arizona license plate number is RV 88L4.

Jerome Police Chief Allen Muma was the first person to reach the couple after an emergency call came in. It took him 40 minutes to get there in a truck, and had to provide first aid until other help could make it to the rugged, remote location.

Wednesday, Muma said he’s spoken with both victims — Phoenix-area residents who are recovering — though the man who was driving has had to undergo more than one surgery due to his injuries.

If anyone has information on the whereabouts of the Raptor or those who may be involved in the theft, contact Detective Todd Swaim at 928-554-8605 or Yavapai Silent Witness at 1800-932-3232.

If a direct tip to Silent Witness leads to the arrest of a suspect or suspects involved in the theft, a cash reward will be offered.

Citizens can contact the Yavapai County Sheriff’s Office with information or questions at 928-771-3260, or through the YCSO website, ycsoaz.gov.