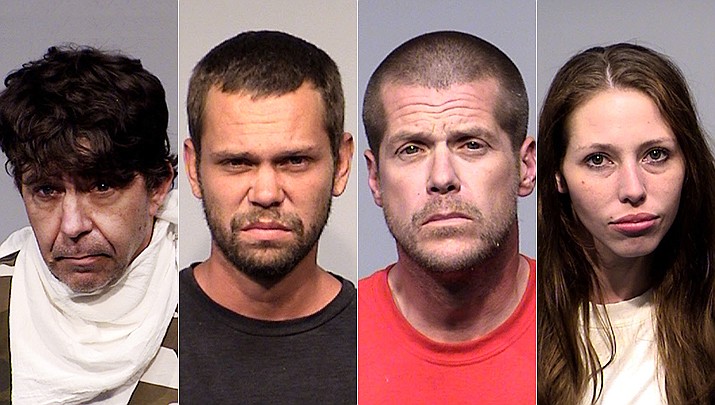 Three Cottonwood men and a woman from Sedona have been arrested for the alleged use and sale of methamphetamine and heroin following an investigation by the Partner’s Against Narcotics Trafficking Task Force.

According to a news release from the Yavapai County Sheriff’s Office, earlier this month PANT detectives received information that 28-year-old Moriah Calhoun from Sedona was involved in the use and sale of methamphetamine and heroin.

Calhoun and a male accomplice were believed to be operating the drug operation out of a motel room in the 800 block of South Main Street in Cottonwood, according to the YCSO news release.

“During follow-up, detectives received additional information confirming illicit drug activity at the motel, which resulted in the granting of a search warrant,” the news release states.

On Aug. 13, in the early evening hours, detectives saw a silver passenger car leaving the motel after someone from the targeted room got into the vehicle. A Cottonwood police officer was able to conduct a traffic stop nearby and contacted the occupants including Calhoun as the driver and her two passengers, 40-year-old Jason Stone and 27-year-old Nicholas Dubuque, both from Cottonwood.

A Cottonwood police K9 completed an exterior sniff of the vehicle and alerted to the odor of illicit drugs. Based on the alert, detectives searched the interior and found a “Monster” beverage can near where Stone was seated.

“This can was actually a ‘hide-a-can’ used generally to conceal valuables. When opened, detectives discovered about 20 grams of heroin in various baggies,” the news release states.

As the follow-up continued, Dubuque was found in possession of a syringe with heroin residue in a pants pocket and a piece of tin foil and a smoke tube, both with fentanyl residue, concealed in his socks.

The search warrant was served and when detectives entered the motel room, they detained 50-year-old Joel Deems from Cottonwood. No additional contraband was located. Joel admitted drug use but denied knowing about drug sales from the room.

-Calhoun admitted to smoking fentanyl that day, acknowledged participating in drug sales by setting up deals, but denied knowing about the heroin found in the “hide-a-can.”

-Dubuque admitted to smoking fentanyl earlier with Calhoun and denied knowledge of the heroin found in the vehicle.

-Stone admitted owning the “hide-a-can,” but claimed not all the heroin was his.

All four suspects were booked into the Camp Verde Detention on the charges indicated below:

Moriah Calhoun - Possession of a narcotic drug (heroin), possession of dangerous drugs (methamphetamine), promotion of prison contraband (meth found in her bra during booking), and two counts of possession of drug paraphernalia (heroin and methamphetamine related) during the service of a search warrant at her hotel room. Held without bond.