Alcoholics in treatment weigh risk of COVID-19 exposure vs. fear of relapse 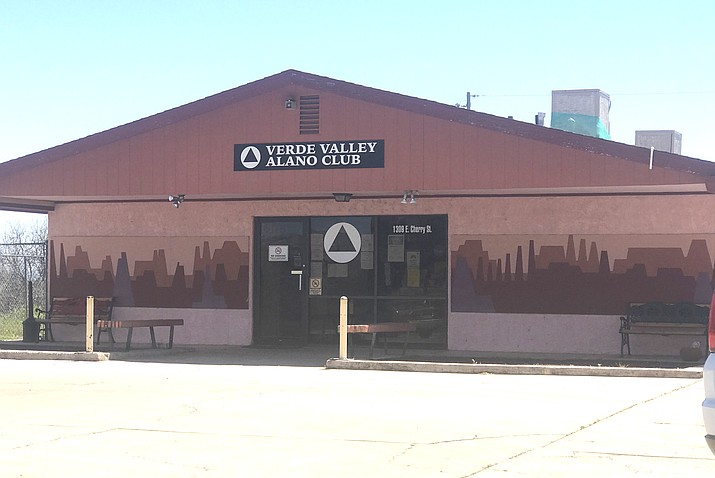 The Verde Valley Alano Club is an outside organization, separate and distinct from AA, Alanon, or any other 12-step meeting. Each meeting held at the club is conducted by an autonomous group, explains its website. The website says the Alano Club is open and days and times for Zoom and in-person meetings are listed on the website and are wheelchair accessible: http://www.vvalanoclub.org/vvac-12-step-meetings/. VVN file photo

COTTONWOOD -- The coffee cups and pots have been put away at the local Alcoholics Anonymous meetings in Cottonwood during the pandemic. But the crucial in-person meetings are on-going at the Verde Alano Club.

Some in his meeting group feel in-person meetings are so important that they would rather die of COVID than alcoholism, explained James Harris, general service representative for Alcoholics Anonymous in Cottonwood.

Harris said his group held meetings outdoors throughout the pandemic.

“Don’t be afraid to show up,” Harris said. “If you need to wear a mask, wear your mask.”

They follow the guidelines, but don’t enforce them, he added. “It’s an individual’s choice.”

This group is unique in that “not everyone is safer apart,” explained Terri Farneti, spokesperson for the Yavapai County Health Department.

“That isn’t to say they aren’t taking precautions,” she said, “but rather really focused on how to still meet the needs of this demographic while staying safe.”

The board of directors of the Verde Valley Alano Club voted to remain open throughout the pandemic, explained Kevin Norris, president of the club.

The purpose of the Verde Valley Alano Club is to provide a meeting place for all 12-step programs, he said.

A lot of those meeting went to Zoom during the pandemic, some were put on hold, some canceled, Norris said.

But one thing is clear, the meetings are seeing less people attending in person.

“It’s been a financial crunch for the Alano Club,” Norris said, which is a non-profit organization operating in Cottonwood for 10 years running. They have also cancelled their pot lucks during the pandemic.

The actual attendance of some of the meetings has dwindled considerably compared to what it used to be. One meeting that had 25 people on average now has five, he said. The overall numbers are about half.

In general, there are about 30 meetings being held a week at the club, he said..

The Zoom meetings are still taking place and that’s why the in-person attendance is still low, Norris said.

It’s a problem if the meetings are not being attended in-person because the groups have to pay rent, he added. Four meetings have stopped altogether.

People referred by the courts are required to attend in-person meetings. A person in a halfway house who does not have computer access does not have the option of going to a Zoom meeting, Norris said.

The chances for a person getting sober are much higher if they have access to an in-person meeting, he said. Especially in the first year of sobriety.

“They have no idea about Zoom. Heck they have just found about Alcoholics Anonymous.” Norris said. “It’s vital they have a meeting and are able to attend it.”

The Zoom meetings were good, but they’re not like meeting person-to-person, Harris said. All people in a Zoom meeting, other than the person speaking, are muted.

In-person, everyone can feel the person’s emotions, see everyone’s reactions, and the laughter that comes in the meeting. “You don’t get to feel and hear the laughter” in Zoom, Harris said.

Harris didn’t know anyone who has relapsed because of the lack of in-person meetings, but he did notice that people were stressed and worried about not having those meetings.

There is no evidence that drug-related deaths have increased in Yavapai County during the pandemic, according to data from the Yavapai County Medical Examiner’s Office.

There was an alarming increase in drug-related deaths between 2018 and 2019 before the pandemic and it appears 2020 is staying consistent, she said.

Treatment centers have taken additional measures to ensure those in need of substance-abuse care receive treatment during the pandemic, Farneti said.

“I have had sober living residents call me concerned and I provided them with recommendations on creating safer environments, such as temp checks, hand washing frequently/upon returning to the house, surface sanitization, distancing when possible,” she said.

Spectrum Healthcare plays a huge role in treating substance-abuse residents the Verde Valley, and they have continued to have group meetings as allowed by state health officials

“We are offering visits for our services virtually, in homes, in the community as well as in person,” Dean said.

Harris said most of the meetings at the Verde Alano Club have resumed in-person. These include sessions called Steps to Success, Book Study, Eye Opener, Dr. Bob Group and others.

The “Birthday Meeting” group is resuming for the first time this month since February, he said. “I didn’t want to get a lot of the people together because a lot of them are older people.”

“We have several people coming back that have really missed it,” Harris continued. They hadn’t been to a person-to-person meeting since March.

The Verde Valley Alano Club is an outside organization, separate and distinct from AA, Alanon, or any other 12-step meeting. Each meeting held at the club is conducted by an autonomous group, explains its website.

The website says the Alano Club is open and days and times for Zoom and in-person meetings are listed on the website and are wheelchair accessible: http://www.vvalanoclub.org/vvac-12-step-meetings/

The purposes of the Verde Valley Alano Club are to provide a clean and sober environment where people can have fellowship and socialize with one another, and to provide a meeting place of all 12-step programs.

Donations to the club can be mailed to the Post Office Box on the Verde Alano Club website, Norris said.

The Verde Alano Club website explains that the coffee has been put away (BYOC), but points out that until the Arizona governor or Cottonwood City mayor issues proclamation of quarantine that would affect are a closure, they will remain open for in-person meetings.

Norris said he has a friend who is 20-plus years sober that “does not do Zoom.”

“He’s at an age that Zoom is not something he would do.”

“They still need to attend meetings.”