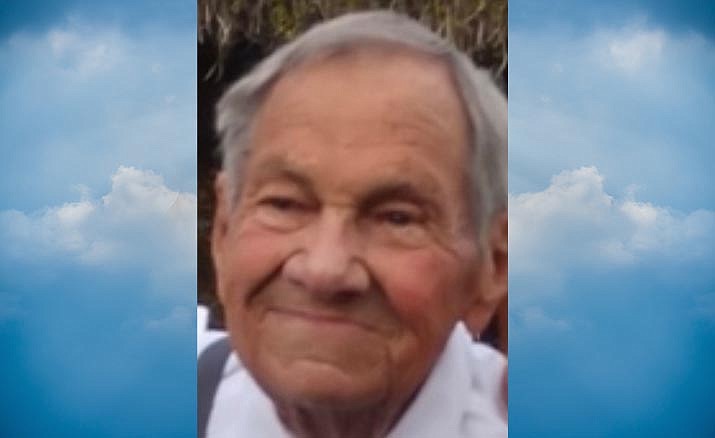 He was born on May 4, 1934, in Globe, Arizona to William Sebird (Buff) and Ruth Lourina Edwards. Buff grew up in Globe and was a member of the Globe High School, Class of 1952.

He married his sweetheart, Julia Virginia (Ginger) Alexander, from Miami, Arizona on May 8, 1955 in Globe. The newlyweds moved to Phoenix, where Buff had a job at Reynolds Aluminum. Buff and Ginger had 2 children, a daughter and a son.

Throughout their lives, there were those who they “unofficially adopted” into their family, that were bonus children and grandchildren to them.

Buff soon found his true calling and career in road construction. He ended up owning his own construction company until his retirement.

Throughout his life, Buff had a love of horses, fishing, history and gardening. He owned various horses throughout his life. He loved to have a vegetable garden and especially liked growing roses at his home. He enjoyed reading and watching movies and TV shows about history.

Buff loved family most of all. He was an avid storyteller, with a wonderful sense of humor. His children and grandchildren loved hearing him tell stories of his family life growing up.

He had a keen memory and ability to make the stories come alive when sharing them. When asked what the most important thing he ever did in his life was, he quickly replied that it was marrying Ginger and second to that was becoming a father.

He said he always tried to be fair and to be a man of integrity. He earned the respect of others and was admired by all. He had friends from all walks of life and valued every relationship that he had.

He is survived by his daughter, Julia L. (Larry) Wayment of Mount Juliet, Tenn.; his son, Buff A. (Eddie/Edna) Edwards of Mesa, Ariz.; 14 grandchildren; 30 great-grandchildren and 2 great-great grandchildren. Buff is also survived by one of his sisters, Colleen Patterson of Camp Verde.

The family is grateful for the amazing care given to Buff, from THEMA Health Care Services, who provided hospice care to Buff at home.

At his request, Buff was cremated, with services provided by Horizon Funeral Care. Services were held on August 29th, 2020.