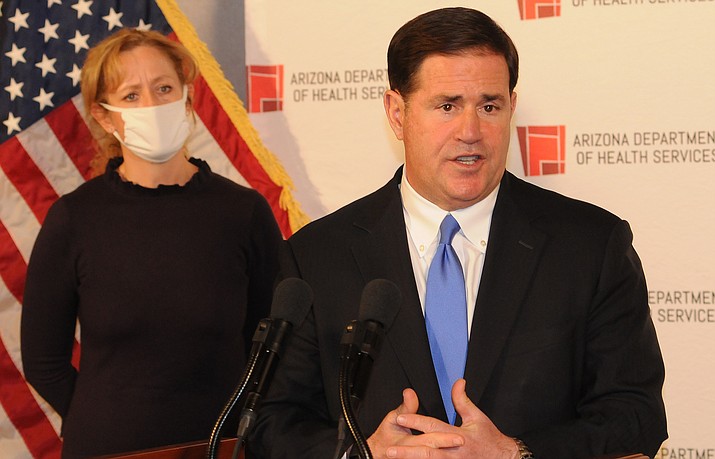 PHOENIX -- Arizona is expected to receive "thousands" of doses of vaccine for COVID-19 by the middle of the month, according to Gov. Doug Ducey.

At a press conference Wednesday, the governor also laid out a distribution plan that gives first priority to health care workers, residents of long-term care centers and other "vulnerable populations.''

And Ducey is specifically including teachers in that first group.

That dovetails with his often-repeated argument that he wants more in-classroom teaching and less online education. The premise is that once teachers have immunity they will be more willing to return to work.

And while the date for vaccines for all Arizonans has yet to be determined, Ducey issued an executive order spelling out that all residents will be able to get inoculated "without financial barriers.''

Wednesday's announcement comes as the state continues to set new records for infections. And there are projections that the state will not just run out of regular beds in intensive-care units by the end of the year but that the demand for those beds will hit 300% of capacity by mid-January.

Ducey, however, announced only one new restriction: some new health and safety requirements for large gatherings. Until now, the state had left the question about how those events could be held to local communities.

That decision for no new mitigation strategies puts the governor at odds with elements of the state's medical community.

The Arizona Medical Association pointed out Wednesday that other states facing the same rise in COVID-19 cases already are implementing new restrictions, including curfews and closing restaurants for indoor dining.

But Marjorie Bessel, chief clinical officer of Banner Health System, said as far as she's concerned that point is long past.

"What we do need is mitigation,'' the doctor said during an afternoon press briefing ahead of the governor's event.

"A curfew is mitigation that absolutely can work,'' Bessel said. "It can work and it will work if we deploy it.''

And she specifically praised Tucson Mayor Regina Romero and the city council for voting Tuesday night to impose as 10 p.m. curfew that will run for three weeks.

None of this should be a surprise to Ducey. Bessel along with chief medical officers at Dignity Health and the Mayor Clinic sent a letter this week to Cara Christ, the state health director, specifically urging not just a 10 p.m. statewide curfew but also a total halt to indoor dining for the next 30 days, a ban on gatherings of more than 25 individuals, and a total halt to group athletic activities.

While Ducey is not following any of those requests, the governor did agree to provide an additional $60 million to Arizona hospitals to help them find the staff they need to handle the surge of people needing medical care. That is on top of a $25 million infusion less than a month ago.

But that still leaves the question of whether money alone will resolve the staffing shortage.

Bessel said the problem is that Arizona isn't the only state with a surge. That makes it difficult to recruit help from elsewhere.

And while Banner is in the process of filling 1,500 positions, she said efforts are still underway to hire 900 more.

What makes all this necessary is what Bessel said is a "grim picture'' of the situation in Arizona. She said her prediction that Banner hospitals will hit 125% of bed capacity this month and even exceed that, at least briefly, in January.

That trend is not unique to Banner

The most recent data from the Arizona Department of Health Services already has ICU bed use at 90% of capacity.

Hitting 125% is not necessarily a problem as hospitals are required to have made plans for that surge, including coverting other non-ICU beds and other facilities for intensive-care use. But the Institute for Health Metrics Evaluation predicts that the demand for ICU beds will hit 300% of capacity by the middle of January unless there are steps taken to curb the spread of the virus.

Bessel acknowledged that all the predictions are based on current trends and do not take into account the availability of a vaccine.

She said, though, none of that is likely to affect what will happen this month and next, as the first inoculations won't even begin until the middle of the month and there are unanswered questions aboutn the supply.

Vaccines and hospital funding aside, some of Ducey's announcements Wednesday are designed to deal with the effects of the virus -- at least on businees..

It starts with a plan to provide more financial help to restaurants which were initially closed during the early stages of the pandemic and now are limited to 50% of indoor capacity. And the key is to promote more outdoor dining.

That includes $1 million in grants to help restaurants and other dining facilities expand their outdoor dining operations. There also is a separate $100,000 going to the Arizona Restaurant Association for the same purpose and another $100,000 to the Arizona Lodging and Tourism Association to aid hotels and their restaurants in strengthening their sanitation and mitigation practices to protect patrons and staff.

But not everything being done for restaurants is financial.

Ducey is suspending a provision in law that says restaurants can serve alcoholic beverages only to patrons dining in-house or at an outdoor patio directly connected to the business. That has proven to be a barrier for restaurants that have received local permission to operate in parking lots and even on cordoned-off areas of the street because there is a sidewalk in between.

The governor said that prohibition makes no sense when the state, with its good weather, should be encouraging more dining outdoors, where the risk of spreading the virus is reduced.