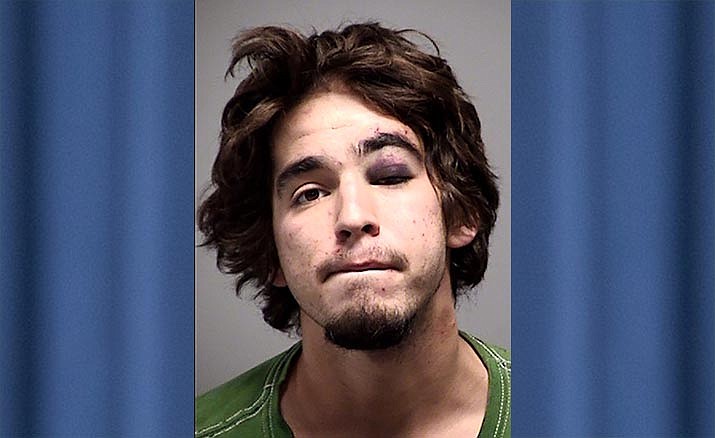 COTTONWOOD – A Cottonwood man ended up in jail last week after police say he punched a sheriff’s deputy in the face at the scene of a vehicle crash.

Zane Lodmell-Sarrett, 22, was taken to the Camp Verde Detention Center on Dec. 8 on charges of aggravated assault on a law enforcement officer, aggravated assault with a deadly weapon (vehicle), criminal damage, endangerment and four counts of DUI.

According to a release from the Cottonwood Police Department, officers were dispatched to the area around State Route 260 and Fir Street, at about 8:50 p.m., for a vehicle collision. The release said there was an on-duty Yavapai County Sheriff’s Office deputy at the intersection when the collision took place.

This collision involved two vehicles. The release said as the deputy was assessing the involved parties’ injuries, one of the drivers, Lodmell-Sarrett, attempted to get back into his vehicle, as if he was going to drive off.

The deputy made contact with Lodmell-Sarrett, who, according to the report, then swung at the deputy, striking him in the face. The deputy had to use physical force to initiate the arrest.

Based on the collision investigation, the release states, it was discovered Lodmell-Sarrett failed to stop for a red traffic light and also turned left — into oncoming traffic — creating the collision.

Lodmell-Sarrett had visible signs of intoxication, according to the report, along with an unopened bottle of Jose Cuervo tequila in his vehicle. He was taken to Verde Valley Medical Center in Cottonwood for treatment of a head injury.

Lodmell-Sarrett was the only occupant of his vehicle. The two occupants in the other vehicle did not sustain any injuries.

At the hospital, officers determined Lodmell-Sarrett’s blood-alcohol concentration was 0.334% -- four times the 0.08% legal limit for driving.