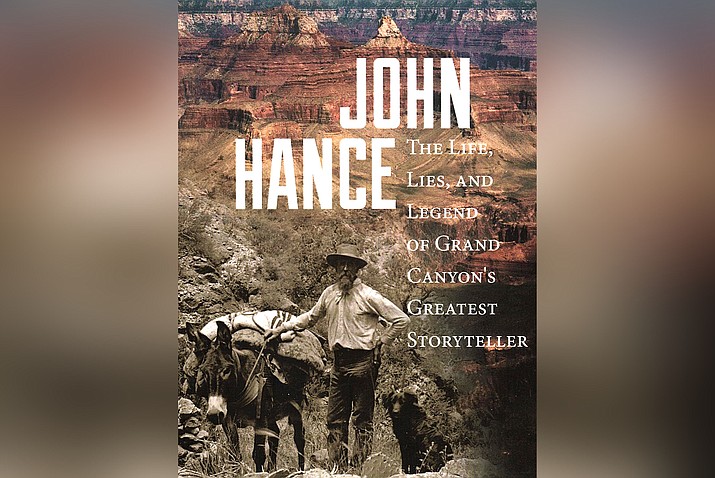 John Hance came to Prescott in 1868, farmed in Chino Valley, homesteaded on Ash Creek and on the Verde River, was well-known in the Verde Valley, and after 1880 became famous at Grand Canyon.

While visiting Grand Canyon many years ago, my grandfather met John Hance and enjoyed the stories he told. Much later, beginning when I was 4, my canyon visits were more enjoyable because grandpa repeated John Hance's imaginative stories, also imitating his Appalachian drawl, high-pitched voice, and odd gestures. If tourists were nearby, grandpa would also entertain them with "facts" he'd learned from John Hance.

My extended family pitched their tents for a week in the campground near the rim when I was 10 years old. Grandpa and I walked over to the viewpoint and joined a crowd of people. A uniformed park ranger was explaining that the Colorado River had taken millions and millions of years to carve out the Grand Canyon. I looked up at grandpa. He smiled and winked because we both knew John Hance had dug the Grand Canyon and put the rocks and dirt in a huge pile called the San Francisco Peaks.

When I recently read Shane Murphy's book, "JOHN HANCE: The Life, Lies, and Legend of Grand Canyon's Greatest Storyteller," I learned about the real John Hance and the renowned figure he became. Little remembered today, he was once an Arizona institution known worldwide. He came to Arizona Territory in 1868, farmed in Chino Valley, homesteaded on Ash Creek and on the Lower Verde River, and during the 1880s rose to fame at Grand Canyon due to his trail and tall tales.

John Hance was born in 1837, in East Tennessee, an area known for its exceptional storytellers. By the time he was 10, he'd learned to tell outlandish stories and the family had moved to Missouri where John rode racehorses for income while attending school. With the advent of the Civil War, John enlisted on the Confederate side. He fought in two battles, was captured in the second fight, and starved for almost two years as a prisoner of war in Union prisons.

Released at war's end, John Hance was hired by wagon master Lorenzo Butler ("Shanghai" or "Tame Bill") Hickok, a brother of James Butler ("Wild Bill") Hickok. John and his younger half-brother, George Washington Hance, left Rolla, Missouri with Lorenzo Hickok in early September 1865, with 200 wagons loaded with government supplies pulled by 6-mule teams. They arrived at Fort Leavenworth, Kansas, several weeks later, and continued moving westward hauling freight across the plains. In New Mexico Territory by November of 1868, the Hance brothers joined others on a wagon journey to Arizona Territory. After leaving Albuquerque they worked their way through 2 feet of snow in the high pines, reaching Antelope Springs by Thanksgiving. Years later, George Hance returned to this place and attended "the christening of Flagstaff when the Boston colony nailed the old flag to the staff at 'Old Town Springs' on July 4, 1881." (Coconino Sun; Flagstaff; December 1, 1911.)

The arrival of the Hance party at Prescott was noted as: "about 30 single men and 1 family ... from the East." (Weekly Arizona Miner; December 12, 1868.) John and George Hance purchased 640 acres in Chino Valley for $2,500, then bought adjoining property. By 1870 the Hance brothers had a large spread with "300 acres in corn, 50 acres in millet, and 20 acres of beans." (Arizona Weekly Miner; August 27, 1870.) A few months later John gave up farming, sold his share to George's partner, and claimed homestead land some 20 miles south of Camp Verde along Ash Creek where he began freighting and contracting.

Today, John Hance's homestead is located near the intersection of I-17 and Orme Road. John received a patent for 160 acres in May of 1876 after living on and improving the property for 5 years. His land was on a road joining Turkey Creek (an early Black Canyon Diggings supply dump to the south) with the Orme-Dugas Road, which intersected the Verde-Prescott route near Bower's Agua Fria ranch. This isolated, yet central location provided John Hance and John Ricketts, who lived on the adjoining property, the opportunity to haul freight between Black Canyon and Prescott or Camp Verde. George Hance also claimed homestead land he called the "Cienega" near the Intersection of I-17 and Arizona 169, the road to Prescott. It was a convenient stopping place for travelers, freighters, and soldiers.

Along with George Hance, who becomes one of Camp Verde's central characters after breaking his leg and winding up working behind the counter of Hugo Richard's new store, the book profiles other early day Verde Valley personalities to paint background scenes for John Hance's story. Among them are Joe Melvin, the valley's first permanent settler, Wales Arnold, John Ricketts, Murray McInernay, Luther Knowles, General George Crook's chief of scouts Al Seiber, and others.

John Hance's verbal confabulations contained all the elements of the classic yarn: snake oil salesmanship, a clever twist or two in the storyline, a cadenced delivery, and mannerisms to match the event. John earned his reputation as a storyteller during his years hauling freight in Arizona Territory. Dr. William T. Corbusier was originally assigned to care for the health of the Native Americans at Date Creek. He came with them to the Verde Valley, and eventually lived with his wife and two sons in tents at Haskell Springs, the military headquarters for the Rio Verde Indian Reservation. He wrote, "John Hance delivered hay and other supplies at [Camp Verde] and the [Haskell Springs] agency. Each load was delivered with tales taller than any grass known, and it was from this amusing and entertaining accomplishment that he earned the name 'Honest John.'" ("Verde to San Carlos: Recollections of a Famous Army Surgeon, 1869-86.")

In April of 1878, after John Hance and John Ricketts amicably divided up their freighting teams, John Hance and Murray McInernay became partners. By 1879, they were homesteading 160 acres along the river south of Camp Verde and had 36 steers and 4 freight wagons. They obtained military contracts to provide hay and wood to the military at Camp Verde and Fort Whipple and became quite successful. Two years later, however, they dissolved the partnership and Murray started a family at Prescott while serving as under-sheriff for Bucky O'Neill.

John Hance left the Verde and moved north to become the first non-native resident at Grand Canyon. On the rim near Grandview Point, he constructed a cabin and built the first inner-canyon trail to the Colorado River. He welcomed tourists, provided them with tents and food for $12 a day, and guided them down his trail. In addition to providing factual information, he told such entertaining stories that he became a legend in his own lifetime. "God made the canyon, John Hance the trails," wrote Bucky O'Neill. "Without the other neither would be complete." Another visitor, Chester P. Dorland, recorded: "Captain John Hance --- a genius, a philosopher, and a poet, the possessor of a fund of information vastly important, if true. He laughs with the giddy, yarns to the gullible, talks sense to the sedate, and is a most excellent judge of scenery, human nature, and pie. To see the Canyon only, and not see Captain Hance, is to have missed half the show." (Prescott Evening Courier; June 27, 1942.)

President Theodore Roosevelt mentioned John Hance. After visiting the canyon on May 6, 1903, he remarked: "I shall be pleased to say I have seen God's greatest and most stupendous natural wonder --- the Grand Canyon. But the greatest satisfaction of all will be the remembrance of having shaken hands with the greatest liar on earth."

A Hance relative recently told a John Hance story. John was "gifted with a beautiful straw hat by a guest at the canyon," but he made the mistake of placing it on a stump while he saddled his horse. Two eagles swooped down, grabbed the hat, began fighting over it in midair, and tore it in two halves. John said the next time he saw those eagles, "they were each wearing half a hat and that is why the white on their shoulders always looks 'jagged.'" (Courtesy of Shane Murphy.)

Early Arizonans asked no questions about a person's past. In fact none of John Hance's old friends could "say with certainty what state he came from. If anyone questioned him concerning his past, he would go straight up into the air, and reply that he did not like ancient history. (Prescott Evening Courier; June 27, 1942.) However, on his 80th birthday, September 7, 1917, he wrote of arriving on the rim of the canyon 33 years earlier, on June 11, and listed many of the well-known people who had visited him there. He also kept a hotel register of sorts, which is in the archives of the Arizona Historical Society at Tucson. A rare typeset copy of "John Hance's Visitors' Book," called "Personal Impressions," is currently available on ebay for $313, and Print-On-Demand paperback editions are available on Amazon for much less."

Shane Murphy led Grand Canyon river trips for 20 years, spent 8 years uncovering detailed information about John Hance, visited the places he lived and worked, and reviewed documents, newspapers, and other written material for this biography. The truth behind John Hance's life is remarkable even without embellishment. "JOHN HANCE: The Life, Lies, and Legend of Grand Canyon's Greatest Storyteller," is available at bookstores, and online at the University of Utah Press, ebay, Amazon, Walmart, on Audible, and as a PDF ebook, etc.