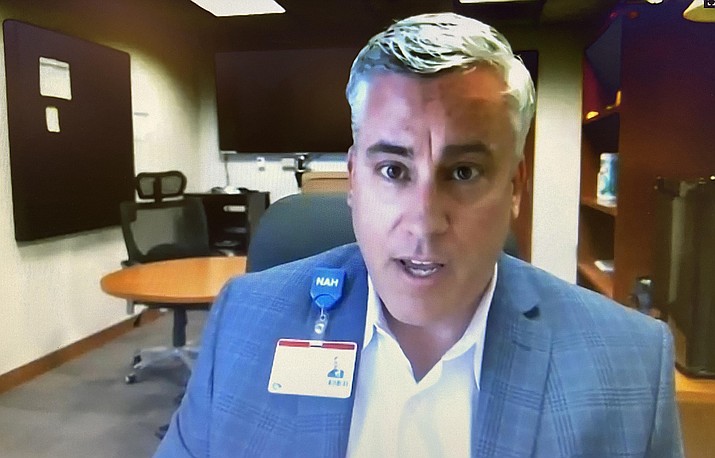 NAH Chief Quality Officer John Mougin said a recent survey of the company’s nearly 3,000 employees, completed in November, showed about half want to take one of the vaccines, so 1,400 doses were part of the initial order to be administered over the rest of December and into early January. NAH video screenshot

FLAGSTAFF – There is going to be another spike in positive COVID-19 diagnoses about two weeks after Christmas vacations end. The question, according to one Northern Arizona Healthcare administrator, is how much hospitalization and death will accompany that spike.

“Americans are even more likely to get together for Christmas than for Thanksgiving,” Feuquay said. “And it will likely involve some members of the high-risk, older-than-65 age group. This will spread both the virus and lead to at least some new hospitalizations. We’re worried.”

NAH’s two hospitals — Verde Valley Medical Center in Cottonwood and Flagstaff Medical Center — continue to see an increase both in total COVID-19 patients hospitalized and critical care beds in use.

Verde Valley Medical Center was using six of its 13 Intensive Care Unit beds, up from four on Dec. 10. The total number of COVID-19 patients being treated at the hospital rose from 21 to 26 over the past week.

According to Josh Tinkle, NAH’s chief administrative officer for Flagstaff Medical Center, that facility has had only a slight rise in its number of COVID-19 patients going from 46 to 49, but also has 26 patients on ventilators and 39 patients in its 55 ICU beds.

“We staff based on our critical care numbers, with some room for an influx,” Haase explained. “We have a ‘flex’ staffing plan, and can change within hours or within a day, but we can only take so much of a spike.”

Tyffany Laurano, chief nursing officer for NAH, said while intensive care at VVMC has 13 beds, the facility was only staffed Thursday to care for patients in nine of those beds. With six beds occupied, that only leaves the hospital to take on three more ICU patients on short notice.

The two hospitals’ high numbers are occurring just as NAH is preparing to deliver two newly approved COVID-19 vaccines to its own staff and other high-risk, high-priority parts of the Northern Arizona population. NAH Chief Quality Officer John Mougin said a recent survey of the company’s nearly 3,000 employees, completed in November, showed about half want to take one of the vaccines, so 1,400 doses were part of the initial order to be administered over the rest of December and into early January.

Mougin said vaccines are meant to be part of a larger process. Not only should people continue to physically distance, wash their hands and wear masks, but not too much should be made of antibody test results.

“We don’t have many answers yet on antibodies,” Mougin said. “There needs to be more data collected — some of which will be from time-lapse study. If you test high for COVID-19 antibodies, all it really meant initially is that you’re a good candidate to be a plasma donor.”

“Antibodies go away after a period of time,” Feuquay said. “Get the vaccine anyway.”