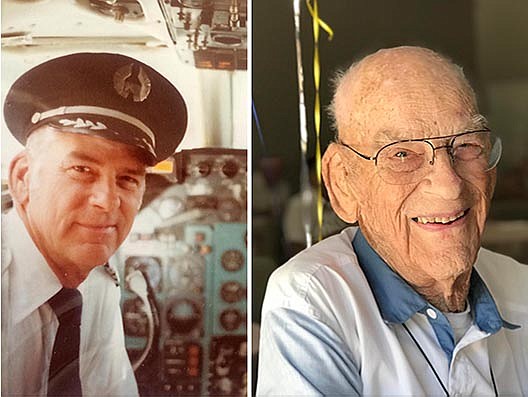 In his early years he became interested in flying, which later became his chosen career. From Massachusetts, he moved to Texas to be a flight instructor in the Army Air Corp. After World War II, he was one of the first pilots hired by Trans Texas Airlines, later Texas International Airlines.

He met his first wife, Delories, lived in Dallas, and raised two children, Robert Jr. and Jane. Bob was widowed in 1972.

On one of his flights to Los Angeles, Bob met Carol and after their marriage, they joined two wonderful families, including her 3 children, Jeff, Lori and Sheri. In later years his family grew adding 12 grandchildren and 3 great-grandchildren.

Bob loved his job as an airline pilot and was always amazed that he was paid for doing something he loved so much. He enjoyed many hobbies, including sailing, traveling, square dancing and RV’ing.

After living in So. California for many years, Bob and Carol moved to Clarkdale, Ariz., where they have lived for 25 great years.

Bob will be sadly missed by his family and many friends in the U.S. and around the world. He is very much loved and will never be forgotten. Although the last several years of his life included increased physical limitations, Bob was still very sharp mentally, and often told interesting stories about his life. He greatly appreciated the caregivers and staff at Cottonwood Village Assisted Living.

He was preceded in death by his first wife, Delories; his son, Robert Jr.; his brother, Elliott, and his son-in-law, Lori’s husband, Don Richards. Bob will be remembered for his faithfulness, his loyalty, his kindness, his integrity, his sense of humor and his love for his family.