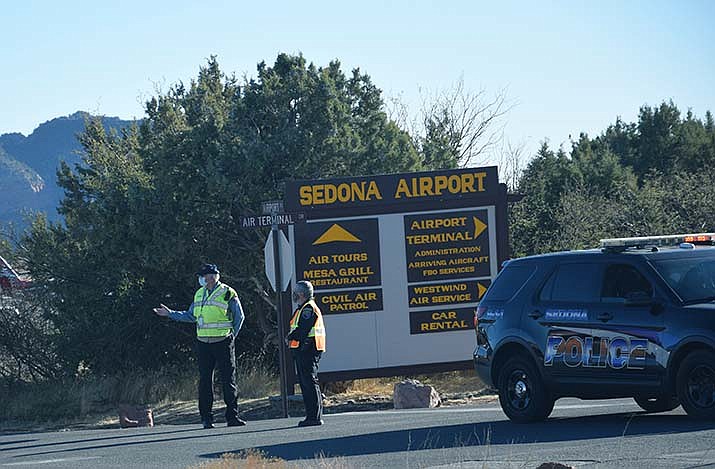 Officers wait for other law enforcement to arrive at Sedona Airport on Sunday afternoon. The Sedona Police Department, in a news release, said one 37-year-old man was shot by police when confronted about a possible stolen vehicle, and is in stable condition, and an officer suffered wounds as well. VVN/Jason W. Brooks

SEDONA – An officer and a suspect were both injured when a Sunday morning incident at the Sedona Airport led to gunfire, according to a news release.

The release, from the City of Sedona, said that according to initial information, on Sunday morning, a Sedona Police Department officer was involved in a shooting in the parking lot of the Sedona Airport.

A 37-year-old white man was shot and is currently in stable condition at a hospital, the city said. The officer involved is being treated at a hospital for wounds, but his apparent condition was not given.

Less-lethal tactics were deployed initially, the city said. It wasn’t clear if the officer suffered a gunshot or other types of wounds.

The other two suspects are in custody. No names or charges have been released.

The Arizona Department of Public Safety sent its officer-involved shooting team to Sedona to independently investigate the cause and circumstances of the incident.

Yavapai County Sheriff’s deputies supported the scene, sending its Crisis Response Team and assisting with any Sedona calls for service as needed.

The city said it will release information as it becomes available.