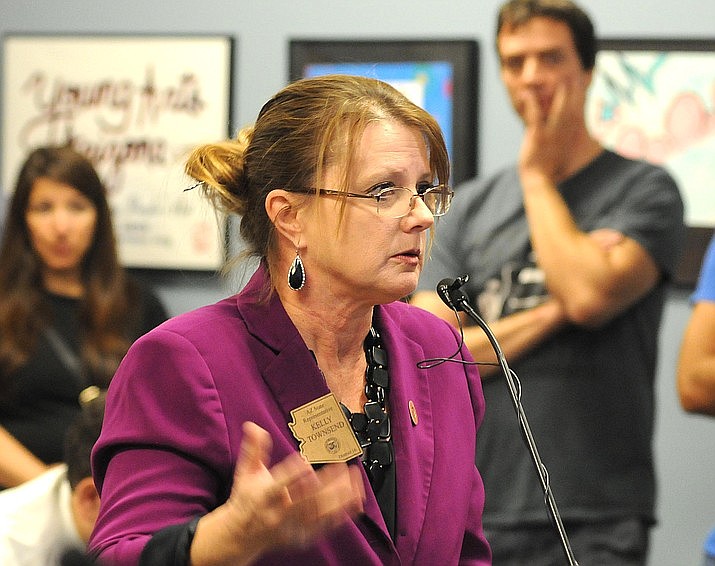 PHOENIX - With COVID-19 still flaring, the president of the state Senate has ordered that anyone coming into the building must wear a face mask to attend sessions.

And that already is provoking a fight from at least one incoming senator.

Senate President Karen Fann said the directive, issued Monday, is designed to ensure the safety of everyone conducting business at the Capitol. That includes not only those with preexisting conditions, but also those who care for others who are vulnerable or at risk.

In her memo to senators, the Prescott Republican acknowledged that the issue of masks has become a political lightning rod. But Fann said she hopes that having these rules will put that issue to bed — at least for legislative business — and "eliminate some of the divisiveness we have encountered throughout this pandemic.''

That does not appear to be working.

The decision already is getting a fight from Kelly Townsend. The Mesa Republican, who now serves in the House, was just elected to the Senate, said she has no intention of complying.

"I've already told them where I stand,'' she told Capitol Media Services. "What are they going to do? Arrest me?''

What can be done, if the rules are followed, is simply refuse to allow Townsend into the building.

"They're going to physically block me from the building?'' she asked.

"Well, that'd be fun,'' Townsend added, promising to invite a reporter there when she attempts entry.

Townsend also is questioning Fann's ability to enact what is formally being called a "protocol,'' as there has been no vote of lawmakers. But Fann believes she's on solid ground, citing an existing — and approved — formal rule which gives her, as president, not just control of the Senate chamber but "all of the parts of the Senate wing and all other areas and buildings used exclusively by the Senate.''

Fann, however, indicated she's unlikely to back down — even if it brings legislative action to a halt.

"Failure to adhere (to these rules) could result in lack of quorums, inability to conduct voting and other work we need to accomplish,'' she warned. And the ultimate result, Fann said, would be shutting down the session.

The rules are designed to facilitate actual committee hearings, including allowing members of the public to actually participate in hearings.

But it remains doubtful that supporters or foes of legislation will be able to pack hearing rooms the way they have until now. That's because visitors will be allowed into the building only to actually participate in a committee hearing or for a prescheduled meeting with a senator or staffer.

The House is expected to announce its own rules this coming week. Those rules are expected to be similar, with Fann saying the Senate rules "were developed in collaboration with the House for uniformity and consistency for all within the Capitol community that participate in legislative proceedings.''

The rules come as lawmakers grapple with how to conduct business amid the continued threat of infection from the coronavirus.

It starts with the idea of limiting the chances that someone who is infected will even enter the building. Under the rules, anyone wishing entry, including lawmakers, staff and visitors, will be subject to temperature checks.

Then there's the requirement for masks.

A legislator or staffer in his or her own individual closed office will be free to unmask. And there even are allowances for people who have their own dedicated work space, which can include a desk or cubicle.

"However, if one person enters another person's dedicated work space, then everyone in that space must wear a mask or other appropriate face covering,'' the rules read. "There are no exceptions.''

And not just any mask or piece of cloth covering just part of the face.

"Masks or other face coverings must cover the nose and mouth and should fit snugly against the sides of the face,'' according to the policy.

There is a provision for those who are "medically unable'' to wear a mask according to their doctor. They are required to wear a face shield that covers the mouth and nose. That's not a preferred solution, with the rules urging these people to work remotely.

There is a separate rule for "social distancing'' of six feet between individuals, along with no shaking hands or other physical contact.

The rules also create a new duty for Senate pages, requiring them to disinfect hearing rooms and the caucus rooms after each meeting.

There will be free testing for staffers and lawmakers during certain hours of each day.