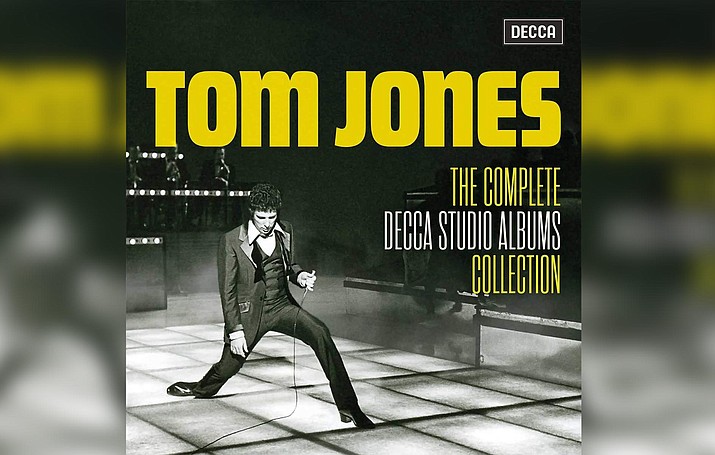 For the very time ever, all 15 of Tom Jones’ Decca studio albums, along with a special expanded two CD physical package of single-only tracks, rare B-sides, and first time on CD recordings from the archives Hide & Seek (The Lost Collection) are being released together as a box set.

In a career spanning six decades, ‘Jones the Voice’ never sells a song short and never short-changes his fans - the longevity of his career speaks to a talent of a very special kind.

Tracks include: Chills and Fever, Breathless, To Wait for Love (Is to Waste Your Life Away), I Tell the Sea, With These Hands, What’s New, Pussycat?, Untrue, (Won’t You Give Him) One More Chance, Thunderball, Stop Breaking My Heart, Never Give Away Love, Once There Was a Time, Not Responsible, This and That, City Girl, Triple Cross.

Ron Keel says that most of the songs from his newest record, “South X South Dakota,” happened “very organically in the studio as we were working on the Fight Like A Band sessions or just having fun.

“I found out later that producer Mike Dresch was actually recording those jams, and upon hearing some of the tracks it was obvious we had the makings of something special,” he said.

“Whether you grew up on this stuff like I did or not, there’s a common thread here that ties it all together - toughness and twang as Metal and Country collide on sacred southern ground.”

Ron Keel is a rock & country vocalist and guitarist for a number of bands from the 1980s to the modern day, including the hard rock band Keel. He began his recording career with a Tennessee-based band named Lust. He relocated his next Nashville band Steeler to Los Angeles in 1981. In 1983 Steeler signed with Shrapnel Records and released their self-titled album which also featured Yngwie Malmsteen, Rik Fox and Mark Edwards.

Tracks include: Train Train, Flirtin’ With Disaster, Ghost Riders In The Sky.

Waterparks – Fandom: Live In The Uk

Fandom: Live In The UK is the first live album from Texan trio Waterparks, available as a CD/Blu-Ray set featuring their performance at the O2 Academy in Birmingham from January 2020.

The DVD consists mainly of songs from their 2019 breakout album Fandom, which sold 13,000 copies in its first week charting at #3 on the Top Current Albums chart and #32 on the Billboard 200.

The album also spawned their first single to hit pop radio, “Dream Boy,” and other songs.

Michael Giacchino’s debut non-soundtrack is a masterfully constructed concept album titled Travelogue Volume 1. Travelogue Vol. 1 by Giacchino and his Nouvelle Modernica Orchestra takes the listener into a journey of both space and time, unlike anything they have heard before.

The record follows a space traveler seeking solace on a planet that isn’t as broken and lost as her own distant world, upon discovering earth the story unfolds throughout it’s 11 captivating tracks.

To say more would be to spoil the journey and interpretation of the listener as the story is told. The songs have a beautiful, timeless, hazy feeling that transports the listener to their own imagination.

Musically, it’s indebted to the easy listening wonders of such legendary musicians as Martin Denny and Lex Baxter (both of whom pioneered the lounge music of the ‘50s & ‘60s).

While Giacchino continues the tradition of using driving jazz-infused rhythms, he updates this timeless sound with synths, samples & a full string orchestra.

Composed and performed by Galás in September 2019, the 21:19 minute piece is based on the expressionist poem Das Fieberspital (The Fever Hospital).

Written by German poet Georg Heym in 1912, Das Fieberspital’s depiction of warehoused patients of yellow fever presaged the treatment and hiding of infected and damaged soldiers later in WWI. De-formation depicts a march and delivery of maimed and infected soldiers to hospitals and industrial warehouses throughout Germany during and after the First World War.

In the hospitals the maimed would receive experimental operations and the infected would be confined to protect the mental vitality, enthusiasm, and health of citizens of the State.

The Piano Variations were inspired by Galás’ work on the score for Das Fieberspital. In organizing the work, she realized that the piano skeleton had become it’s own work, and she decided to record that in advance of the vocal work.