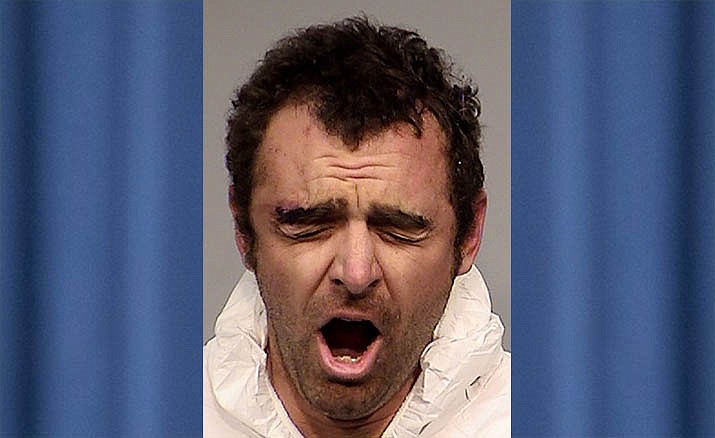 SEDONA – An officer and a suspect were both injured when a Sunday morning incident at the Sedona Airport led to gunfire, according to the City of Sedona.

The city, in a statement, said shortly before 11 a.m. Sunday, Sedona Police Department officers responded to a call from the Sedona Airport Authority, claiming that three persons stole a vehicle belonging to the Airport Authority and drove it onto the airport taxiway.

When SPD officers arrived on-scene, the city said, they located and attempted to detain three suspects in the airport terminal parking lot. After not cooperating with officers, Michael Paul Bergsma, 37, of Cooks, Mich., ran on foot. One officer followed, firing on him with a less-than-lethal shotgun after commands weren’t followed, the city said.

Bergsma then attempted to take the officer’s weapon.

The officer managed to fire his handgun at Bergsma, striking him once in the abdomen. Bergsma continued to fight with the officer and was then tazed by a second officer, who was able to help handcuff Bergsma. At some point in the confrontation, the officer who fired his weapon suffered a wound that required medical care. However, the city didn’t say if the wound was from a gunshot.

Bergsma has been charged with aggravated assault on a police officer, criminal trespass and unlawful use of means of transportation. As of Tuesday, he was in the infirmary of the Yavapai County Detention Center.

The officer who fired his handgun has worked for SPD four years. He was released from the hospital Sunday night and is recovering at home from minor injuries.

Per the Sedona Police Department’s standard protocol on officer-involved shootings, that officer has been placed on paid leave, the city said.

Thomas Trantham, 43, of Tarzana, Calif., and Cynthia Griffin, 40, of Havre de Grace, Md., were also arrested at the scene. They were both charged with criminal trespass and unlawful use of means of transportation.

The Arizona Department of Public Safety sent its officer-involved shooting team to Sedona to independently investigate the cause and circumstances of the incident.

Yavapai County Sheriff’s deputies supported the scene, sending its Crisis Response Team and assisting with any area calls for service as needed.