Thunder & Lightnin: Live at Theater on the Green 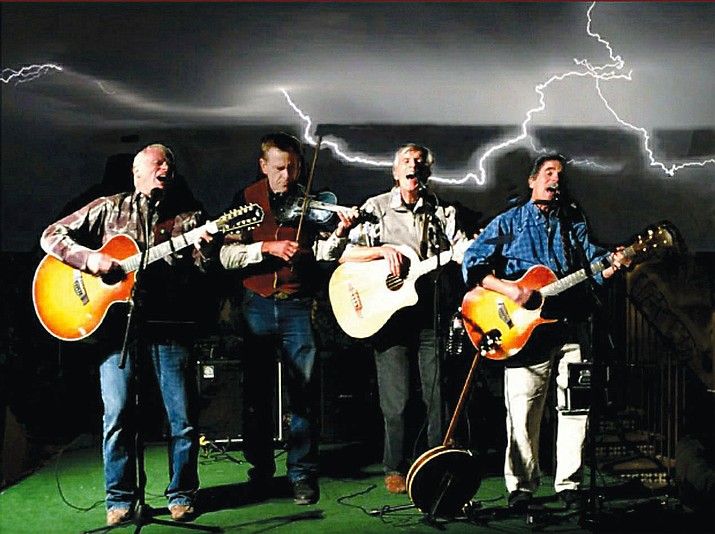 Thunder & Lightnin: Live at Theater on the Green is the band’s third, and perhaps the most representative CD recording to date.

With no live shows, the CD is being distributed on the worldwide web – hence the virtual world tour.

What makes it exceptional, though, is how it all came about. But first, a bit of background sets up the story.

Inside the COVID-19 era, Thunder & Lightnin’, like the biggest names nationally on down to regional acts, is exploring all avenues possible to keep in touch with their followers and to grow their fan base.

Since March 2020, the band has produced and distributed 17 music videos dubbed the Quarantine Concert Series. They also produced concerts this year as headliners for the Coconino County Fair and for Sedona Wolf Week – both virtual and streamed worldwide.

These productions required remote audio and video recordings to be created and passed between members for months, eventually being mixed and mastered into single concert presentations.

Simultaneously, a project in the works since September of 2019, was underway and proceeding – for the same reasons as noted above – at the pace of your average glacier.

On the 20th of that month, Thunder & Lightnin’ performed under the stars on the pavilion stage in the Town of Prescott Valley’s venue, Theater on the Green.

For 90 minutes this band of banjo, fiddle bass and guitars performed a wide-ranging mix of original works and favorite cover materials in their signature vocal harmonies for a large and enthusiastic audience.

Of note was the outstanding sound reinforcement services of Prescott Pro Sounds.

What was not known to the players was that the entire concert – every instrument and voice (seven in all) – was recorded on studio quality tracks and gifted to the band by the sound company.

Studio efforts, of course, allow for re-takes, dubbing and adjustments in an environment where the players are aware of the work being recorded.

What was captured that evening was an unvarnished live concert performance uninhibited by the knowledge of being memorialized in recording.

For reasons many things in the year 2020 did not follow normal protocol, the job of taking those raw tracks and mixing them into balance fell on members of the band in their respective studios.

Mixed with the projects already in play, this undertaking consumed most of the summer and fall months. Finally mastered at Flagstaff’s Mudshark Studios in November and just returned from the manufacturer, “Thunder & Lightnin: Live at Theater on the Green” is poised for release December 18, 2020.

Physical and digital copies are available at all major online outlets like iTunes, Spotify, Amazon, and Apple Music, and on the band’s website thunderandlightnin.com